With the quick success of Da Vinci's Demons Starz is going to the 7 seas for a show about pirates.  It is by Michael Bay  and will air in 2014. Here is the Starz press release and trailer for the series. 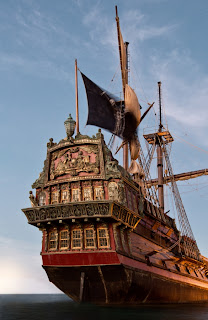 The eight-episode first season of the pirate adventure centers on the tales of Captain Flint and his men, and takes place twenty years prior to Robert Louis Stevenson’s classic “Treasure Island.” Toby Stephens (Die Another Day) stars as Flint, the most brilliant and most feared pirate captain of his day, takes on a fast-talking young addition to his crew who goes by the name John Silver.  Threatened with extinction on all sides, they fight for the survival of New Providence Island, the most notorious criminal haven of its day – a debauched paradise teeming with pirates, prostitutes, thieves and fortune seekers, a place defined by both its enlightened ideals and its stunning brutality. 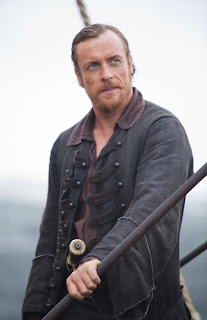 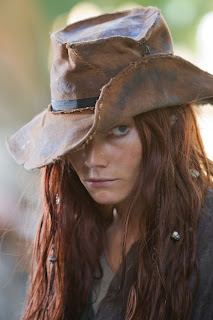 “Black Sails” stars Luke Arnold as the classic character, “John Silver,” in the years before his well-known feats.  Arnold is a native of Australia, where he began working in television on series including “McLeod's Daughters,” “Rush” and “Rescue: Special Ops.”  He also went on to star in the feature film, Broken Hill.  Zack McGowan is featured as “Captain Charles Vane,” a rival pirate captain to the brilliant and feared “Captain Flint,” played by Toby Stephens.   McGowan is most recently known for his role in the series, “Shameless.”  Hannah New steps into the role of “Eleanor Guthrie,” a beautiful and determined young woman who runs the smuggling operation on New Providence.  She is a promising London-born actress who starred in the miniseries, "El Tiempo Entre Costuras (The Time Between Seams)," the feature Fuga De Cerebros 2 and most recently was filming Maleficent, a Sleeping Beauty tale told from the alternative perspective of the villainous sorceress, starring Angelina Jolie and Elle Fanning.  Rising star Jessica Parker Kennedy has been cast in the role of “Max,” a tortured young prostitute who sees the dark side of New Providence.  She is known for her work in the television series, “The Secret Circle,” and has appeared in the films 50/50 and In Time.  Clara Paget (in the upcoming Fast and Furious 6, Johnny English Reborn) plays the beautiful but cold-blooded “Anne Bonny"