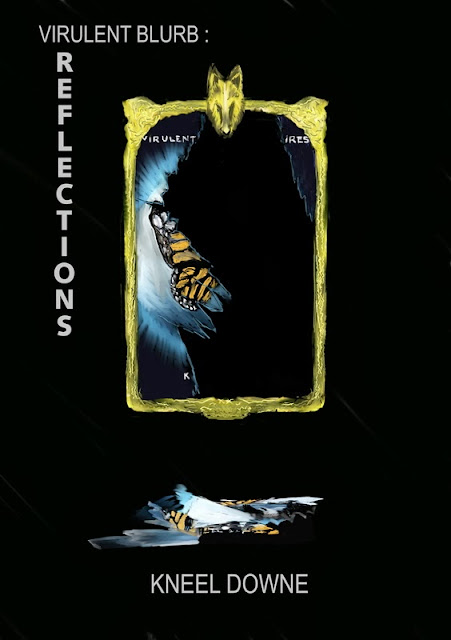 “Look little one…look…can you see into the beyond?”

Virulent Blurb: Reflections is the third book by Kneel Downe and the second book in as many months.  Virulent Blurb: Reflections is the follow up to last year’s Virulent Blurb: Fractures.  Unlike his last book Amelia’s Song this book is more of a traditional science fiction book that has boasts stories that are linked in a roundabout way by a corporation called Pyramid.  The stories have nothing in common except that one word that boasts a greater mystery that unfortunately you’ll have to wait a bit longer to find out what.

I really enjoyed this book but mainly my favorite was story was A Breaking of Skies.  It is a story that is about, well, the breaking of the sky and the eye witness accounts of what happened on that day in the Blubverse.  To come up with all those accounts of what happened and have them weave into a story was pretty clever and very entertaining to read as I was engrossed to find out what happened and the effect it had on some of the central characters in the overall story that has taken place on Twitter.  Out of all the stories A Breaking of Skies is the best in the book and surely is my favorite.

The Other Wolf is another fascinating story as we meet Lobo’s brother who is also a wolf as the title implies.  Instead of being of cop Lycan is a private detective hired by the Pyramid to find something.  This was a basic detective story that was really good and entertaining even if it was short.  Sometimes it is the simpler stories that work well and after reading a collection of stories that made your mind work overtime it was good to have a story that was simple and entertaining.  Hopefully we get more stories like this in latter collections and also another helping of Lycan and his world.

Unlike his previous book Amelia’s Song which was more experimental and did not follow the rules Kneel gives us a book that is more straightforward and more of the traditional science fiction story.    Reflections is a traditional book that tells a really good story in several parts about the Virulent Blurb Universe.  It still breaks the rules of conventional storytelling but it is also a book that has something for everyone.  If there was one fault that I had with the book was that it was too short and it kept me wanting more when I finished with it.  I guess that isn’t a bad thing as it makes the anticipation of the next book to be more rewarding.  Virulent Blurb: Reflections is a very entertaining read and an excellent addition to the Blurb collection.
9 out of 10