Doctor Who Magazine 497 Cover and Details 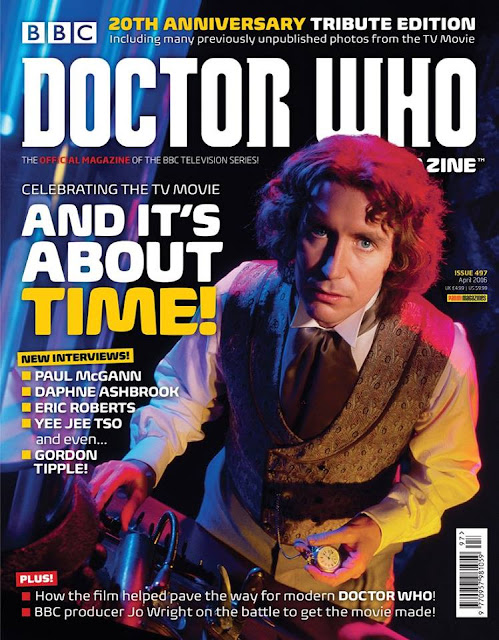 Out today in the UK is the newest issue of Doctor Who Magazine.  This issue will be celebrating 20th Anniversary of the Paul McGann Television Movie.  You can pick this up today in the UK and later in the month in the US.

20 years on, Doctor Who Magazine takes a look back at 1996’s TV Movie, with new interviews from Daphne Ashbrook, Eric Roberts, Yee Gee Tso, Gordon Tipple and the Eighth Doctor himself, Paul McGann…

Despite being a pilot for a series which never materialised, in hindsight, Paul acknowledges that the TV Movie undoubtedly played its part in Doctor Who’s legacy…

“Those of us who were involved in it, when on the occasions that we do get to meet and talk about it in front of an audience, even four or five years ago… Phil Segal was there, and Yee Jee was there, and Daphne was there, Eric Roberts was there… we all met and there was a proper reunion and we talked about it, and I think the feeling then between us, and the audience agreed, was that yes, flawed it might have been, and a long shot it certainly was, and in the end it failed its chief function which was to go to a series, but… all things considered it was a good idea and it played its part in restoring the momentum enough. It kept Doctor Who going. Ten years later, it came back. And Russell T Davies [showrunner 2005-10] gave the nod, in subtle ways, to it.”

THE TV MOVIE’S LASTING LEGACY
DWM explores how the 1996 venture influenced the revival of the series which would follow in 2005.

DAPHNE ASHBROOK INTERVIEW
Grace Holloway actress Daphne Ashbrook reminisces about kissing the Doctor, and how the TV Movie made her fall in love with Doctor Who.

YEE JEE TSO INTERVIEW
Yee Jee Tso who played Chang Lee looks back on the time when he collaborated with the Master.

JO WRIGHT INTERVIEW
Executive producer Jo Wright reveals how getting the TV Movie off the ground proved to be an almost impossible challenge.

GORDON TIPPLE INTERVIEW
Gordon Tipple delves into his ‘blink and you’ll miss it’ appearance as the ‘old’ Master in the TV Movie.PLUS!

WE’RE GOING ON A WITCH HUNT…
…in part one of our brand-new comic strip adventure, Witch Hunt, written by Jacqueline Rayner and illustrated by Martin Geraghty.

THE TEST OF A MODERN AUDIENCE
Jacqueline Rayner revisits the TV Movie with her twin boys and gives their verdicts in her column, Relative Dimensions.

TIME TEAM
What will the Time Team make of Winston Churchill’s new allies in Victory of the Daleks?

THE POWER OF KROLL
The Doctor and Romana face a huge problem when they land on the third moon of Delta Magna, in this issue’s Fact of Fiction.

DINOSAURS ON A SPACESHIP
DWM puts one of new showrunner Chris Chibnall’s previous episodes under the spotlight.

COMING SOON
DWM previews all the latest Doctor Who CD and book releases.
Plus all the latest official news, reviews, competitions and The DWM Crossword.
Posted by DR5WHO at 9:18 AM

Email ThisBlogThis!Share to TwitterShare to FacebookShare to Pinterest
Labels: doctor who, Doctor Who Magazine 497, Paul McGann