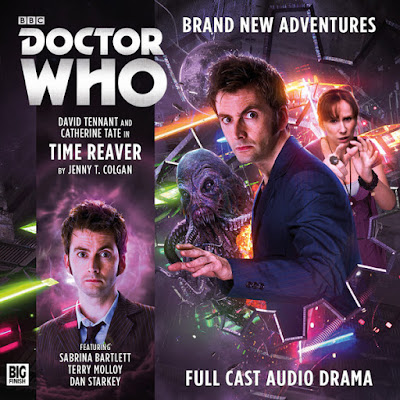 Out now is the second of three 10th Doctor audio adventures from Big Finish as we see The Doctor and Donna come across an illegal weapon known as the Time Reaver.  This audio adventure is available from the Big Finish website.
https://www.bigfinish.com/releases/v/the-tenth-doctor-adventures-time-reaver-1406

Calibris. The spaceport planet where anything goes. Where anyone who doesn't want to be found can be lost, and where everything has its price. Where betentacled gangster Gully holds sway at the smugglers’ tavern, Vagabond’s Reach.

The alien Vacintians are trying to impose some order on the chaos. Soon the Doctor and Donna discover why. An illegal weapon is loose on the streets. A weapon that destroys lives… Slowly and agonisingly.

Other roles played by the cast
Posted by DR5WHO at 2:39 PM