Doctor Who - Harvest of the Sycorax Review 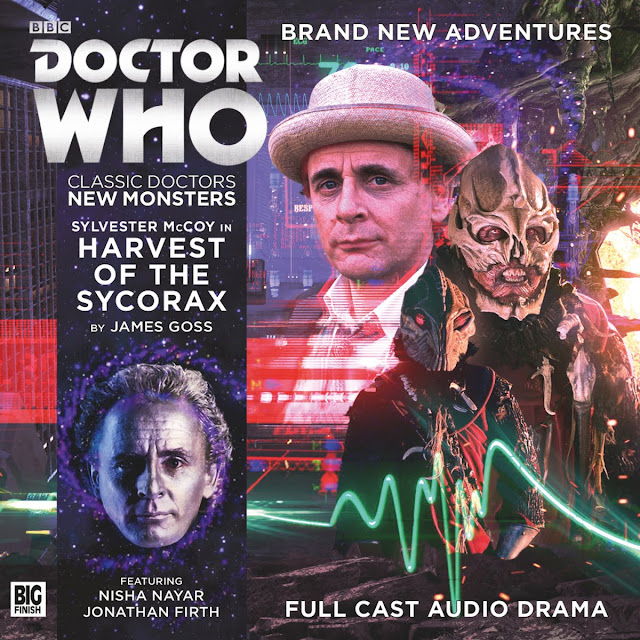 Doctor Who:
Harvest of the Sycorax
By James Goss
Starring Sylvester McCoy

The third disc in the Classic Doctors: New Monsters Box set sees the 7th Doctor taking on the Sycorax.  Now this was another monster from the new series that I wasn’t all that thrilled to see again as they were mostly one dimensional and didn’t seem all that interesting of an alien threat to warrant a return.  But Big Finish brought them back and did their best to try and make them threatening.  But I wasn’t buying it.  It just didn’t seem to work for me having the Doctor taking on the Sycorax and then doing his 7th Doctor manipulation act on them just didn’t seem be all that convincing.  But if you listen to this story you figure out quite quickly that the Sycorax are just a minor character in this story as the real problem is the drug corp Pharma Corps as they have developed a drug based on your blood type to help you with any ailment or mood.
The Pharma Corps part of the story seemed the most interesting as of course you had a human sell out to the Sycorax giving them the blood types to help in their takeover of the space station they were taking over.  The story was more about how humans are dependent on drugs and the stuff like that to make them happy and health more than dealing with it on their own.  The most telling part of the story was when two females meet and they started having feelings for each other but that was not in vogue as they weren’t matched up.  This story is much more about human dependency with the threat of the Sycorax thrown in.

For the most part I thought this story was ok but it at times felt like I was watching the Christmas Invasion as a lot of the Sycorax stuff seemed way to familiar and there even was the big button thing also.  Sylvester McCoy was really good in the Harvest of the Sycorax and I really liked the chemistry between the Doctor and Zanzibar was really good and I felt she would make a good companion and hopefully Big Finish decides to revisist this and have her be a companion with the 7th Doctor sometime in a future audio release.  I thought they were going to do that at the end but it did feel like they left the door open for her return.

Harvest of the Sycorax is not the greatest or the worst but is so far the weakest story of the Classic Doctors: New Monsters box set but is worth a listen as there is a pretty good message in the story.
Grade C+