Doctor Who - Judoon in Chains Review 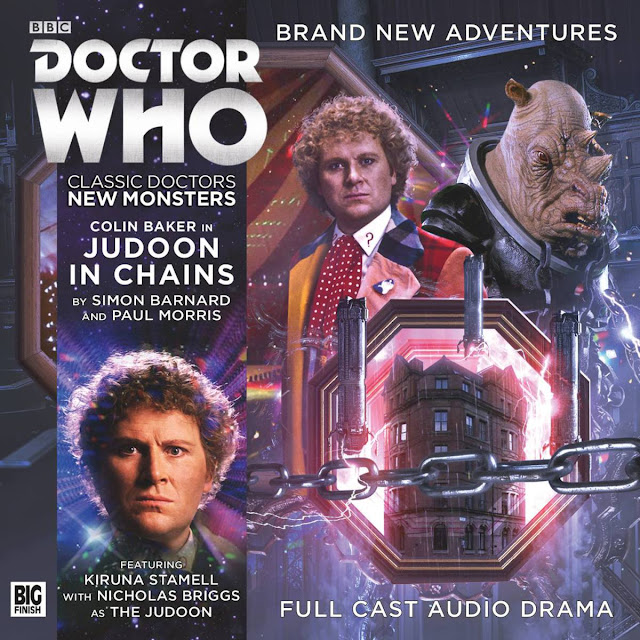 The 6th Doctor is no stranger to courtrooms. This time he is actually not the one on trial but the one coming to the aid of a very unusual Judoon.  Captain Kybo of the Nineteenth Judoon Interplantary Force is stuck in Victorian England and on trial for deserting his post and abandoning his duties as an officer of intergalactic law.  Captain Kybo is an unusual Judoon as he seems to have picked up the English language without the aid of his broken translator and has picked up on reading the books of the time and has even gone on to write poetry.   He does this in his spare time as he is chained up in a traveling circus and is being cared for by Eliza Jenkins who is also a performer of the traveling circus.

The Doctor finds it his duty to help Captain Kybo as he answered Kybo’s distress call and he suspects that there might be something else in play with Captain Kybo that may be influencing what is happening to him and there might be a bigger picture to reveal down the line.  So with the help of Captain Kybo The Doctor prepares to get to the bottom of this mystery of what can make a Judoon act not like a typical Judoon.

When this box set was announced back in 2016 I was pretty skeptical about seeing the Judoon in a story.  They aren’t really a monster they are more a police force in space that happen to look like a rhinoceros.  I wasn’t all convinced that a story that features the Judoon as the center point would make for a compelling story.  I was for the most part wrong but there was just something about this story that just didn’t grab me.  The writers did a good job coming up with a story that wasn’t a typical story that you would expect the Judoon to be in.  They came up with the whole this Judoon is different and made him more intelligent than the average law abiding Judoon who likes to shot first.  They came up with a story about the Judoon being different and running away from his squad and ending up in Victorian England and being held in chains in a circus.  This was all pretty well done and was your typical monster gets domesticated and sees things differently. Been done before and they even threw in some Beauty and the Beast in there for good measure with the relationship with Capatain Kybo and Eliza. This was all good and enjoyable and the best part of the story.

Then you get the alien part of the story and what they used Captain Kybo for.  Apparently they are trying to save their home planet from being terraformed so a company can make a huge profit selling it for building homes and stuff this seemed like an afterthought and thrown in to make a good conclusion.  To be honest I enjoyed the other part of the story rather than the part they used to come up with the conclusion.  This part was luke warm to me and seemed pretty predictable.

Colin Baker put in another great performance and you can really tell over the years the evolution of his Doctor from the yelling loud one to a more compassionate and caring one but with still that hint of fiery personality.  I really liked how they wrote the 6th Doctor in Judoon in Chains  and could really see this story being one on TV for his era.  Judoon in Chains is a decent story that is worth a listen but for me it was just ok but not the worst I’ve heard.
Grade B-