The Hobbit to be shot at 48 frames per second 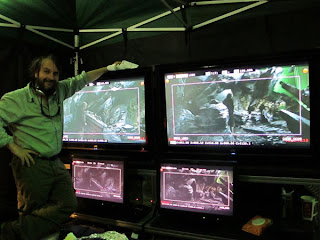 Peter Jackson posted on Facebook that his two part Hobbit film will be shot at 48 frames per second.  The usual frame rate is 24 but Jackson states that an increased rate will reduce the amount of blurriness and judder usually present in all films.  The decision is to support the 3D format which stands to benefit the most from this.  The higher rate will make the 3D images appear smoother and more effective.
Jackson stated:
Shooting and projecting at 48 fps does a lot to get rid of these issues. It looks much more lifelike, and it is much easier to watch, especially in 3-D. We’ve been watching HOBBIT tests and dailies at 48 fps now for several months, and we often sit through two hours worth of footage without getting any eye strain from the 3-D. It looks great, and we’ve actually become used to it now, to the point that other film experiences look a little primitive. I saw a new movie in the cinema on Sunday and I kept getting distracted by the juddery panning and blurring. We’re getting spoilt!
I feel that making the images appear more fluid may make things appear they are on video and therefore, cheaper looking.  It may make the films look more real but I think film has an artistic look that can be more pleasing than something like video. The 48fps may ruin the film feel.  Of course I have not seen it and perhaps it will be just fine.


Not sure how many theaters will convert to 48 fps but I would be very eager to see how it looks.
http://www.ifitsmovies.com/2011/04/the-hobbit-to-shoot-in-48-frames-per-second/
Posted by The Knights at 12:42 PM