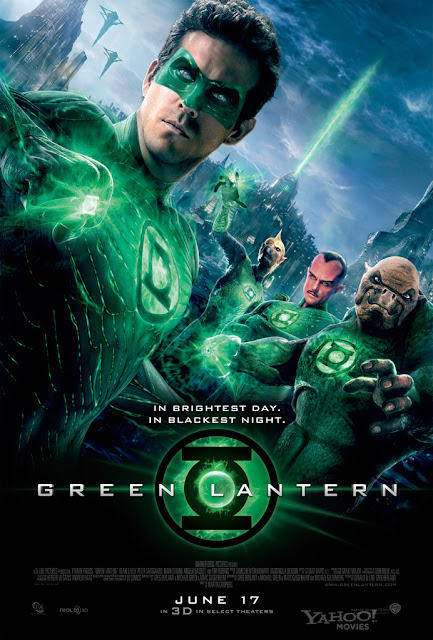 After watching countless trailers and TV spots the Green Lantern movie is finally here.  As I headed to the theater to watch an early showing of it I was wondering if it was worthy of the hype that accompanied it.  As most fans of the Green Lantern comic book would like a movie that is true to the

comic book and one that is immune to Hollywood messing with it.  Well what we got was a very enjoyable movie that had little things in it that I didn't care for.  They were minor things that if you are a fan of the comic you will notice but these things didn't detract from my overall enjoyment of this movie.

As with most comic book movies this one starts off with Green Lanterns origin of how he gets the ring and the training that goes with it.  As most fans know Hal Jordan gets the ring from a dieing Abin Sur. As the ring chooses it's successor it's up to the Corp to train him.  This comes in the form of Killowog.  Killowog is the one Lantern responsible for training all the new recruits and he does this in a very rough and hard manner.  I would have liked the film to feature more of the training aspect but then this movie would be to long and you would lose your audience.  I did like how the origin was handled as it was for the most part just like the comic book.  I was a bit hesitant about Ryan Reynolds being cast as Green Lantern.  I was not that familiar with him besides being Deadpool in Wolverine a couple of years ago but my fears were for naught as I thought he was a pretty covincing Hal Jordan/Green Lantern. 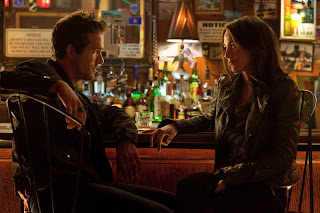 I did like the overall story as it kept me entertained and all the action was pretty good and not over done.  I did like how the dealt with the Hal Jordan and Carol Ferriss on again off again romance in this movie.  Another aspect that was just like the comic book.  The casting of Blake Lively was pretty good as in the comic Carol Ferris was hot number and Blake Lively does fit that bill plus her acting was pretty good also.  Plus you need someone for Green Lantern to rescue so having a hot girl for him to rescue will get all the fan boys going. 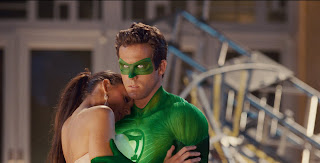 I did like the two bad guys of the film but did not agree with the way they were treated.  These were some of the tings that I did not like about the movie.  For one Parallax was not a rogue Guardian that got consumed by the yellow energy of fear.  Parallax was an entity of the yellow energy.  I guess making it a rougue guardian would make it easier to explain for the average movie goer but I think the entity would be just as simple. Another thing I did not like was that the Guardians did not forge the yellow power ring.  Sinestro did after he got kicked out of the Corps. Then if you stay during the credits you see Sinestro stealing the yellow ring and putting it on.  I don't know what the motivation for this was but hopefully we find out in a second movie. Plus Hector Hammond does not get his powers from a trace of Parallax that was still in Abin Sur.  You could have just used any old scientist instead of Hector Hammond if you were just going to use him and then have Parallax kill him later on. 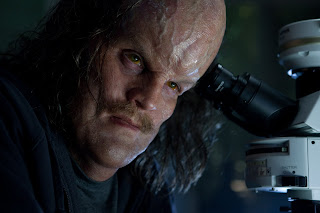 I did enjoy this movie and these grips that I had are just the fanboy in me screaming out but hey that is what a true fan is like.  But in all I do understand why these events happen in Green Lantern as to not make a movie that was to complicated but make one that was simple to follow and be enjoyable.  So if you are looking for an enjoyable super hero movie to enjoy in which the good guy saves the day and gets the girl then this is the movie for you.  A very enjoyable movie that was done well and tried to stay as true to the comic book as it could.
Grade B +