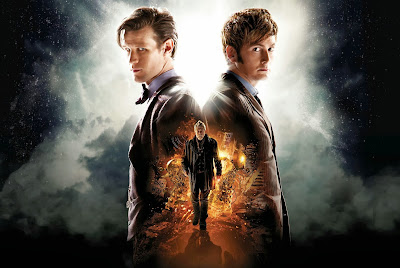 The countdown starts here as the BBC reveals its plans to take over TV and radio to mark the Doctor’s 50th anniversary.

With special programmes planned across the BBC, the celebrations will peak on 23 November with the anniversary episode, revealed as The Day Of The Doctor. Starring Matt Smith, David Tennant and Jenna Coleman with Billie Piper and John Hurt, the special for BBC One has been confirmed as feature-length, with 75 minutes of adventure.﻿

Matt Smith, who plays the Doctor, says: “The Day Of The Doctor is nearly here! Hope you all enjoy. There’s lots more coming your way, as the countdown to the 50th begins now.”
Each channel will be home to unique content, celebrating the wealth of history and talent from the last 50 years.

BBC Two will broadcast a number of new commissions, focusing on telling the story behind the show. For one night only, Professor Brian Cox will take an audience of celebrity guests and members of the public on a journey into the wonderful universe of the Doctor, from the lecture hall of the Royal Institution of Great Britain (1x60 minutess). Drawing on the latest theories, as well as 200 years of scientific discoveries and the genius of Einstein, Brian tries to answer the classic questions raised by the Doctor: Can you really travel in time? Does extra-terrestrial life exist in our galaxy? And how do you build something as fantastical as the TARDIS?

In an hour-long special, BBC Two’s flagship arts programme The Culture Show presents Me, You And Doctor Who (1x60 minutes), with lifelong fan Matthew Sweet exploring the cultural significance of the BBC’s longest running TV drama, arguing that it’s one of the most important cultural artefacts of modern Britain. Put simply, Doctor Who matters. He’ll examine how the show has become a cultural force in its own right and tell the stories of some of the unsung cultural heroes, who pioneered its innovative music, design and storytelling.

BBC Two wraps up its coverage with the previously announced An Adventure In Space and Time (1x90 minutes), which will tell the story of the genesis of Doctor Who and the many personalities involved. Written by Mark Gatiss, the drama stars David Bradley (the Harry Potter films); Brian Cox (The Bourne Supremacy, The Bourne Identity), Jessica Raine (Call The Midwife) and Sacha Dhawan (History Boys, Last Tango In Halifax).

Steven Moffat, lead writer and executive producer of Doctor Who, says: "Fifty years has turned Doctor Who from a television show into a cultural landmark. Personally I can't wait to see what it becomes after a hundred."

BBC Four will introduce audiences to the first Doctor, William Hartnell, with a special re-run of the first-ever story, which marked the start of 50 years of history. The four episodes are being shown in a restored format, not previously broadcast in the UK.

Blue Peter will launch an exciting new competition giving viewers aged between six and 14 the opportunity to design a new gadget that will become part of the iconic science fiction series. Two live Blue Peter specials will see presenters Barney, Lindsey and Radzi joined by aliens and monsters, with viewers challenging Matt Smith to answer their Doctor Who questions.

BBC Three will be home to several exciting entertainment commissions. Audiences will be encouraged to get involved and vote in Doctor Who: Monsters And Villains Weekend, as we countdown to the top Doctor Who monster. For those less familiar with the show, Doctor Who: The Ultimate Guide will introduce fans and viewers to a wealth of archive material and act as a guide to all things Who. A further exciting commission to be announced later this year will see the celebrations finish with a bang.

Danny Cohen, Director of BBC Television, says: “Doctor Who is a titan of British television and I’m incredibly proud to have it on the BBC. It's an astonishing achievement for a drama to reach its 50th anniversary. I'd like to thank every person - on both sides of the camera - who has been involved with its creative journey over so many years.”

It’s not just TV where audiences will be able join in the celebrations; programming across Radio 2, Radio 1 and Radio 4 Extra will also mark the 50th.

BBC Radio 2 will ask Who Is The Doctor? in a 90-minute documentary featuring newly recorded interviews and exclusive archive material. The programme will look at the lasting appeal of Doctor Who and ask how much of its continued success can be attributed to its basic formula.
In The Blagger’s Guide To Doctor Who, David Quantick will give the iconic Doctor the Blagger’s treatment. He’ll be finding out the answers to questions such as, why do Americans think Tom Baker is still Doctor Who? How many Doctors have there really been? Were the Daleks really named after an encyclopaedia?

Finally, Graham Norton will be broadcasting his weekly Radio 2 show live (Saturday 23 November, 10am) from the Doctor Who Celebration in London. In a special three-hour show, Graham will take a ride in the TARDIS and will also be chatting with some of the series’ stars and fans.

Music is a key part of Doctor Who, from the famous theme tune to soaring melodies, but the show has also inspired a whole new phenomenon – Time Lord Rock (TROCK). Radio 1 will look at this genre of music inspired by the Doctor and his journeys through space and time with a 60-minute documentary.

Meanwhile, Radio 4 Extra travels back to 1963 with a three-hour special programme, Who Made Who?, to look at the world that inspired the television series. Doctor Who may have come from other times, but his roots were very much in the present of 1960s Britain. This distinctive programme combines audio from the archive, new interviews and extracts from audio versions of Doctor Who. Additionally, the station will broadcast readings and dramas featuring the great Doctor.

There will also be special content across the official website bbc.co.uk/doctorwho and on BBC iPlayer.
Posted by DR5WHO at 7:32 PM

Email ThisBlogThis!Share to TwitterShare to FacebookShare to Pinterest
Labels: An Adventure In Space and Time, doctor who, Doctor Who 50th Anniversary, The Name of The Doctor