The Thing – Mary Elizabeth Winstead – On My Radar 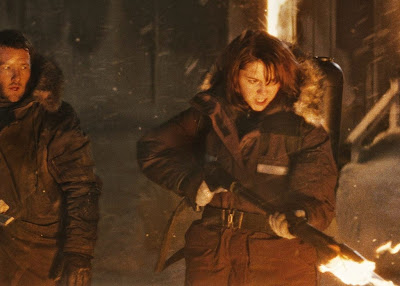 Continuing my new series of movie and TV previews I direct your attention to Mary Elizabeth Winstead, star of the new movie, The Thing. The Thing – wait a minute, didn’t this movie come out already…. Twice?

The 2011 The Thing is actually a prequel to Carpenter’s The Thing and my view on any sort of sequel, prequel or remake of any Carpenter film without Carpenter being involved, is skewed toward disinterest and hatred. Even if Carpenter was involved I would be highly skeptical. Still, I suspect this film will attempt to capture some of the paranoia and tension the 1981 film excelled at. Hopefully the CG effects and other limitations of the story (we know sort of what happens based on the 1981 film) won’t hurt this film.

My interest in this film stems from my love of Sci-Fi movies but I am also a big fan of John Carpenter and feel his The Thing was one of his best films and deserves the high rankings among horror and sci-fi movies of all time. The original 1951 Thing is good in its own right and deserves the praise it gets. Those two Thing movies are so different that I rarely compare the two anyway.

I am not too sure about this prequel. Using the title may be misleading people into thinking it is a remake and for the most part it is. This is a relaunching of the franchise just as Superman Returns was a sequel to the original 80's Superman movie series. Hopefully The Thing works out better. This relaunching may lead to a sequel which would be the remake of the 1981 The Thing – confused? Anyhow the jury is still out on this film.

One bright star in all this is Mary Elizabeth Winstead. I consider myself a fan of this actress only seeing her in a handful of films. The first film that really put her on my radar screen was Death Proof. Her part was small but memorable. The cheerleader outfit didn’t hurt. Other parts in Live Free or Die Hard and Final Destination 3 demonstrated her acting ability. Scott Pilgrim vs. the World saw some more acting skill, playing Ramona Flowers, the distant and troubling girl who is the center of Scott Pilgrim’s attention and trouble.

Now she is the lead in The Thing and I wonder if she can perform well in a story that I am critical of from the get go. It certainly appears, from the trailer, especially the Russian trailer, that the film looks good. One of the most interesting things about the 1981 The Thing was that there were no female characters at all in the movie. This time there are a couple so this may change things up a bit. I feel she will do just fine and look forward to this film more now because she is in it. Not to put any pressure on her but she may make or break this film in my mind.

I am also very interested in a future film for Mary and that is Abraham Lincoln: Vampire Hunter where she plays Mary Todd Lincoln. That sounds great!!

Email ThisBlogThis!Share to TwitterShare to FacebookShare to Pinterest
Labels: Mary Elizabeth Winstead, on my radar, the thing, The Thing 2011