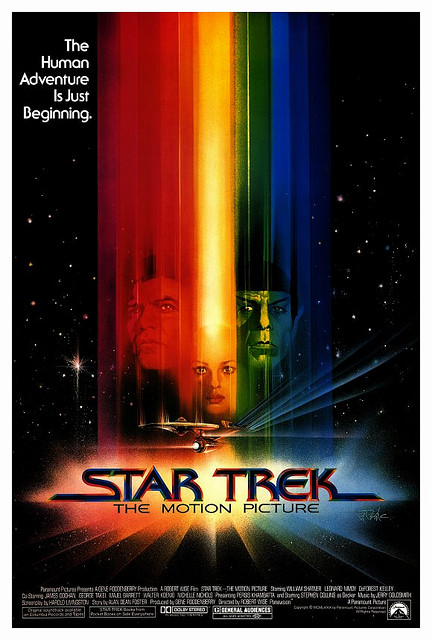 The year is 1979 and Jimmy Carter is the President of the United States, Iran has taken US citizens  hostage at the US embassy and Ronald Reagan is about to embark on his successful primary campaign to become the next President of the USA.  It is also the year that heralded the return of Star Trek from a 10 year absence.  Last seen in 1969 (the cartoon doesn’t count) Star Trek has triumphantly returned in the Motion Picture. While not really the most popular of the Star Trek movies it does in fact have an important place in Trek history.  Without this movie we wouldn’t have all the spinoffs and movies that we have today.  We sure wouldn’t have J.J. Abrams movie coming out next year.  But any way back to Star Trek: The Motion Picture.  It is without a doubt my least favorite of all the Star Trek movies.  For one thing it is a movie that is way dragged out.  It’s really dull and moves very slow.  Don’t take me wrong the plot is actually not bad but getting from point A to point B takes forever because of all the unnecessary fluff that takes place.  I’m not talking about the tour of the Enterprise while it’s in space dock. That scene is essential and pretty cool as most of the fans haven’t seen the Enterprise in years.  Plus that scene just gives you goose bumps.  I mean how could it not.  Seeing Kirks reaction to seeing his old love, the Enterprise, for the first time in a goose age is a delight.  Probably my favorite scene in Star Trek: The Motion Picture. 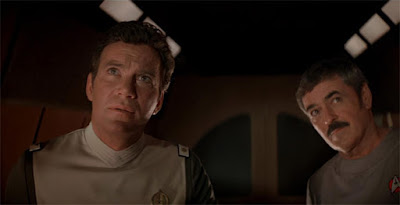 But other than that the movie is quite boring.  It has its moments once they get going and go after V’ger but it’s all the slow stuff before.  Like the warping into a worm hole scene.  Stuff like that.  Plus the characterization of the characters seemed all wrong.  Kirk didn’t seem like the Kirk we all know and love.  Plus Spock seemed off also.  Those two mainstays just don’t seem like they’re usual self.  At least McCoy was just like he always was.  McCoy picks up where he left off from the original series.  He has some of the best lines in the movie and is good for his comic sense that we all know from the original series.  Spock and Kirk just seemed liked wooden cardboard cut outs of themselves. 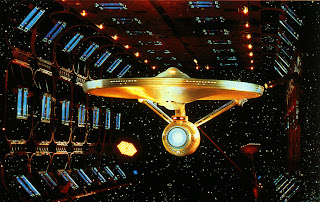 Another funny thing is that there were a lot of scenes of faces looking in shock or in horror.  I mean how many times do we need face shots of Uhura, Sulu and Checkov looking like they are in pain.  Filler just like all the questionable stuff that you are scratching your head over.  Like Spock trying to mind meld with energy.  Still scratching my head over that one.  Or how long it takes the Enterprise to finally get to V’ger, god it takes like forever.  Star Trek: The Motion Picture does have some special effects that are pretty spot on.  I mean for 1979 they are pretty good.  Some of the effects still hold up today.  At least I think so. Mainly those scenes when the Enterprise is taking a really long time to get to V’ger.  Those scenes look really nice.

The main problem with Star Trek: The Motion is that it would have been better as a 2 part television story.  That would have been ideal.  I mean it has the ingredients for being a good TV show.  Which as it turns out is what it was intended to be. With Captain Decker and Ilia taking center stage which turned out to be Next Gen way later on. In fact I kind of found it hard to like Decker as he seemed to not know his role.  After Kirk takes over it seemed like they didn’t know what to do with him. I guess I’ll stand over here and look like I’m interesting. 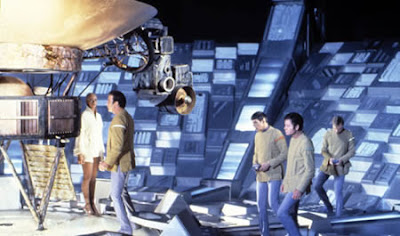 But I am regressing.  It was after all the heralded return of a beloved TV program.  I mean look what transpired after it was released.  A huge franchise with lots of movies and TV shows that kept us distracted for lots of years.  So Star Trek: The Motion not a really good movie, if you knew the back story it was a miracle it got made, to re-start a franchise but luckily for us it did. Thank God.