Doctor Who - The Power of the Daleks Review 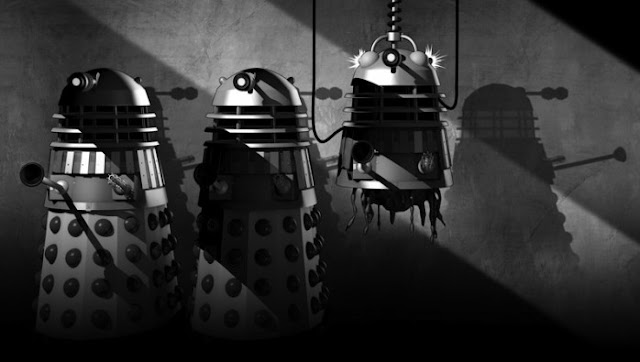 Doctor Who:
The Power of the Daleks
By David Whitaker

"I am your servant."

The TARDIS materializes on the planet Vulcan which is home to an Earth colony.  Inside the newly renewed Doctor is getting to grips with his regeneration into a younger and healthier man.  Ben is skeptical that this new person standing in front of him is indeed The Doctor but Polly is more trusting and believes that the stranger is in fact The Doctor.   The three travelers eventually exit the TARDIS and explore the planet when The Doctor stumbles upon a dead body of what was the examiner from Earth.  The Doctor takes the button that says examiner before he is knocked out from behind.  Ben and Polly are found by a group of the colonist who save them from Mercury poisoning. The Doctor the tries to convince the Govonor to stop Lesterson from experimenting on the Daleks as they are dangerous when Lesterson arrives with a Dalek that appears to be acting like a servant.  The Dalek recognizes The Doctor and in its own way threatens him.  The Doctor is now convinced that Lesterson needs to be stopped before the Daleks create an army with the power that the colony is giving him but as The Doctor hopes he is not too late to stop the Daleks from taking over the colony. 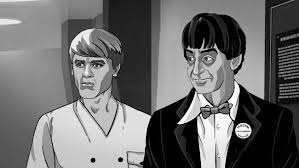 While I am grateful as most fans are that they animated “The Power of the Daleks” and hope they animate more missing stories from Doctor Who but I hope they improve on the animation of the human characters and give the animators a little bit more time to complete the project.  As was pretty apparent the human movements in this animation were pretty awkward and almost like paper dolls.  For the most part it was alright and did not detract from the story at all but at times it was hard watching the movements of the human characters.  One thing that was evident was the facial features.  Ben looked angry all the time and The Doctor seemed really happy but I have to say they got Lesterson right and you could really see the emotion in his face especially when he finds out what the Daleks are actually doing.  The animation of the Daleks was fantastic and done extremely well.  I really liked how they captured the essence of the Daleks and even got the eye to open and retract like it did in the original.  The animation of the Daleks is definitely the highlight of the animation. With that said I didn’t mind the faults of the animation as it was wonderful to see this story come alive. 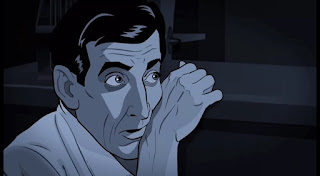 The story itself is really good.  I would have to say that “The Power of the Daleks” is one of the best stories from the 60’s but I can see a lot of the new fans of the show not liking it all that much as “The Power of the Daleks” is a slow paced story that takes its time to develop.  It is six episodes long and at times it can be a tad dull but it is a really great story.  You have the Daleks manipulating the gullible and naïve Lesterson to the point that once he finds out what he has done Lesterson simply loses it and goes mad.  This part of the story is great as you see the horror of his actions once he finds out that the Daleks are mass producing themselves.  You also have Bragen and the rebels gaining control of the colony from the Governor and using the Daleks to help them achieve it or so Bragen thinks as he eventually finds out that the Daleks are no one’s servants.  This was a pretty good part of the story as it kept The Doctor from trying to stop Lesterson and the Daleks. 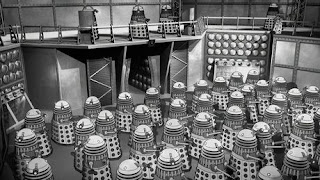 “The Power of the Daleks” has a lot of historical aspects to it as it was the first Doctor Who story that did not feature William Hartnell as The Doctor.  It was up to Patrick Troughton to keep the show going as the replacing the main character of a show had never been done before.  It was risky and by pairing Patrick Troughton with the Daleks who would be a familiar character of the show did help ease the transition and we all know that in the long run it ended up being quite successful. 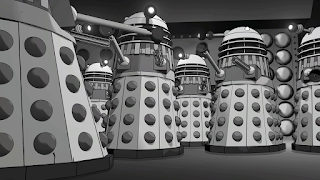 Hopefully someday “The Power of the Daleks” will be found but I find it highly unlikely that it will, hence the money spent on animating it does put the final nail in it being found, but I am thankful that BBC Worldwide went ahead and reconstructed this classic story with animation and hopefully it does well and that we get more missing Doctor Who stories to enjoy.
Grade A