The New York Post and now confirmed by DC Comics has given away the ending to Batman Inc. Issue 8.  If you want to know what it is then continue after the bump if not stop reading now. 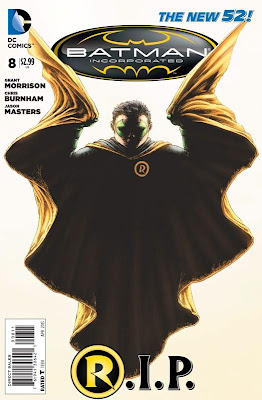 It appears that this version of Robin Damian Wayne will be killed off in issue 8 of Batman Incorporated which will be out this Wednesday.   Damian Wayne will be the second Robin to die as Robin Jason Todd was killed 24 years ago even though he has returned from the dead himself so who knows how long Damian Wayne will stay dead.  Grant Morrison had this to say about it.

"He saves the world. He does his job as Robin. He dies an absolute hero."

Damian Wayne is the son of Bruce Wayne and his arch nemesis daughter Talia al Ghul.  This might not be that much of a surprise to many as Grant Morrison has hinted at this right from the start when he brought Damian into the Batbooks.