Doctor Who - Big Finish To Release The 6th Doctor: The Last Adventure Early 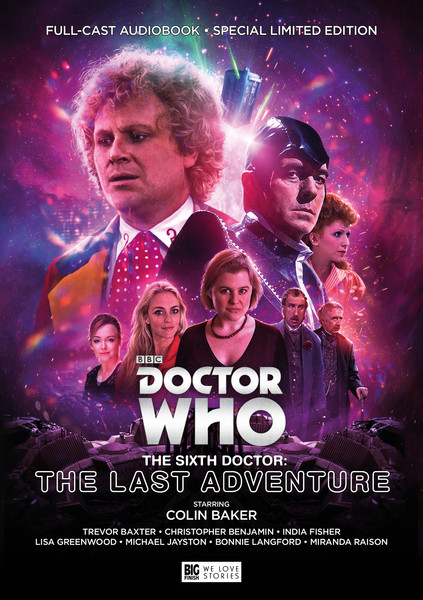 Big Finish will be releasing early The Sixth Doctor: The Last Adventure on August 17th a full six weeks before it was supposed to be released. This will be for Big Finish customers only.  You can order this special release from the Big Finish website.
http://www.bigfinish.com/releases/v/the-sixth-doctor---the-last-adventure-1212

A very special story which at last provides a heroic exit for Colin Baker's much-loved Time Lord. Four hour-long episodes, connected by the presence of the Valeyard, the entity that exists between the Doctor's twelth and final incarnations.

The End of the Line by Simon Barnard and Paul Morris.
The Doctor and his latest companion Constance investigate a commuter train that has lost its way...

The Red House by Alan Barnes
The Doctor and Charlotte Pollard arrive on a world that is populated by werewolves.

Stage Fright by Matt Fitton
The Doctor and Flip visit Victorian London, where investigators Jago and Litefoot explore theatrical performances that have echoes of the Doctor's past lives...

The Brink of Death by Nicholas Briggs
The Doctor and Mel face the final confrontation with the Valeyard - and the Doctor must make the ultimate sacrifice.

The End of the Line

The Brink of Death