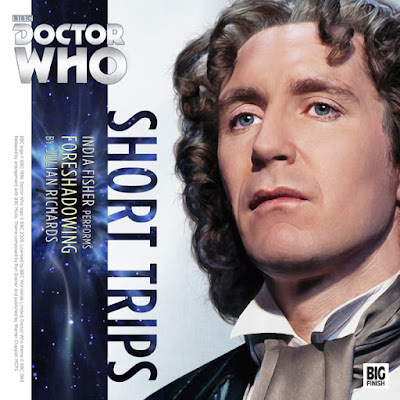 A new month a new Short Trips.  This month it is the 8th Doctor's turn with an advenebture narrated by India Fisher.  You can order the download only story on the Big Finish website.
http://www.bigfinish.com/releases/v/foreshadowing-1101

A young lieutenant is sent to interrogate two strangers who were apprehended whilst intruding at a secure RAF base. The man seems strangely familiar, could pass for Lord Byron, and says he’s an alien; meanwhile his female friend is apparently from 1930. As the lieutenant tries to find out what they’re doing on his base, something connects them with a strange incident earlier in the day: stories of a giant insect…

Cast
India Fisher (Narrator)
Posted by DR5WHO at 11:19 AM