Doctor Who - The Cloisters of Terror Review 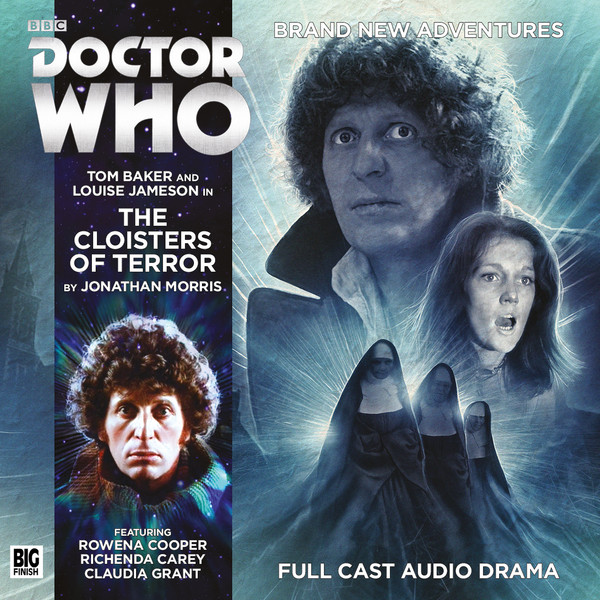 Doctor Who:
The Cloisters of Terror
By Jonathan Morris
Starring Tom Baker and
Louise Jameson

The Doctor and Leela are in Oxford and run into a mystery.  It appears that young girls have gone missing and when The Doctor runs into the Dean of St. Matilda’s College he finds out that it is the mother of one of his former companions.  Dame Emily Shaw is the mother of Liz Shaw who is familiar with The Doctor but is dubious of this fellow claiming to be The Doctor as he does not fit the description that Liz gave to her.  After convincing her that he is who he says he is they begin to investigate the disappearance of the young girls.  It appears that when the girls disappear they see three nuns.  Now The Doctor isn’t convinced that this is ghosts but something alien that can control the visions of its victims.  The trouble is Leela now hears the nuns and is determined to find them.  Problem is if she finds them Leela will be joining the nuns and be a ghost herself.

There seems to be a theme with Series 4 of Big Finish’s 4th Doctor Range.   It appears that there have been quite a few ghost stories this series.  I for one do not mind this as I have enjoyed the ghost stories as they have been pretty clever stories and quite entertaining.  The Cloisters of Terror has continued this streak and is in fact the best one so far.

What I liked about Cloisters of Terror was that it was pretty suspenseful.  It was one of those stories that keep you on the edge and that you need to know what happens next.  Especially with Leela talking to the ghost nuns and that she was the only one who could hear them and the fact that The Doctor could not made you wonder how she would be saved by The Doctor.   The solution was pretty clever and made the most sense.  You’ll have to listen to this story to find out but it was a tad predictable but not predictable in a bad way.

The Cloisters of Terror had a Gothic feel to it and I could see this story fitting into the Philip Hinchcliffe era.   It had a Robert Holmes feel to it and I really enjoyed that.  That era is my favorite era from the Tom Baker years as The Doctor and The Cloisters of Terror really reminded me of that.   If a Big Finish Tom Baker story can remind me of that Gothic era it will most likely gain huge points with me and be one that I like even if the story is a bit weak.  The Cloisters of Terror is not a weak as it was very entertaining.  It also had great performances from Tom Baker and Louise Jameson as they actually sounded like the characters they did back in the 70’s and you can credit a strong script from Jonathan Morris.  Jonathan Morris captured that era really good which made for an entertaining story.  It is key for me that the writer tries and captures some part of the feel of that Doctor’s era or the story is not as enjoyable.  Unless they try and do something really different that works really well then that is the exception.

If you are a fan of the Gothic Philip Hinchcliffe era of the Tom Baker era then The Cloisters of Terror is a story just for you and the only down fall is that it is only 60 minutes long.
Grade A