Doctor Who - We Are The Daleks Review 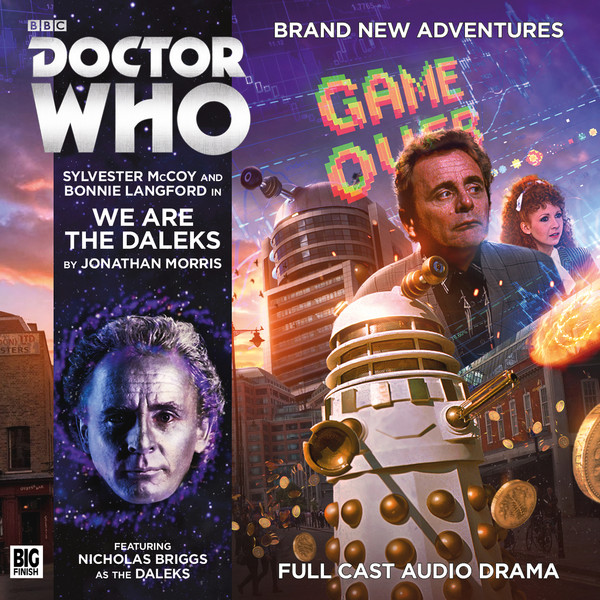 Doctor Who:
We Are The Daleks
By Jonathan Morris
Starring Sylvester McCoy and
Bonnie Langford

The Doctor and Mel have landed in London in the year 1987 and things are not the way that Mel remembers when she left.   For instance there is a building in London that looks a bit like a Dalek.   Another is that people all over London are acting strange and more violent than normal and causing The Doctor to look into this more intently and everything is pointing to that building.

Inside that building it appears that the Daleks are servants.  Asking people what they want to drink or if they want Hors d'oeuvres.  What The Doctor discovers is that the Daleks are trying to make a deal with the politicians of England to sell them technology and secrets to help in their advancement.  But that is only a hidden agenda as Mel figures out that the video game that people are playing in England is more than a game as they are actually doing the fighting against the Thals for the Daleks.  The Doctor has his hands full trying to figure things out and it gets worse once everyone is under Dalek control.

I don’t know about you but I think I am all Dalek out.  Even though Big Finish hasn’t used them that much this year it seems like they are used an awful lot every year between audios and the TV series.  It just seems every year we get a bunch of Dalek stories and most of them are not that good and every once and awhile we get one that is really good.  We Are The Daleks is in the middle of being good and being bad with the sensor arm hoovering more towards good than bad.  We Are The Daleks takes a bunch of ideas used before in Dalek stories and brings them together with mixed results.  I did like the way the Daleks manipulated the politicians and eventually got one to think the same way that they do, big surprise there.  Plus hearing Sylvester McCoy as the 7th Doctor trying to convince Cecilia of the decision she was making was vintage 7th Doctor with one of his great morality speeches.

I also liked how Big Finish has fixed the characterization of Mel.  No longer is she the annoying and screaming companion that she was for her time on the show.  Big Finish allowed her to be more than a screamer and she is more like a companion from the new series who is also far more intelligent and able to use her computer background more than she did on TV.  Mel is allowed to investigate what is going on and to be more hands on.  It would be interesting to see if she was like this on TV if she would be liked more than one of the more disliked companions in Doctor Who history.  Mel is just 100 times better and she feels more like a companion for the 7th Doctor rather than being the prototypical screaming goof.

I did not like the video game aspect of this story.  It’s been done before having teenagers or twenty something adults playing a video game that is in reality real.  In this case the Daleks are letting the players control drone spaceships to attack the Thals and kill them.  This has been done before and not really original.  Especially when the Daleks turn on their mind control device after the ships were turned on the Daleks and continued to go after the Thals.  I just found this part of the story to be too predictable and not that entertaining.

In all We Are The Daleks was not a bad story and it was good to see the non-manipulative 7th Doctor again.  It was also good to hear a Dalek story with Mel and not have her screaming every time she saw one.  The story for the most part was entertaining and it does end on a cliff hanger of sorts so somewhere down the road the 7th Doctor and Mel will be seeing this group of Daleks again.
Grade C+