Doctor Who - The Exxilions Review 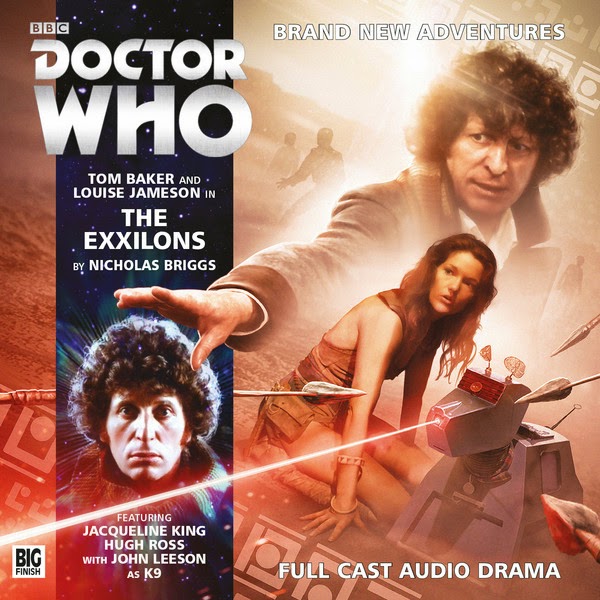 Doctor Who:
The Exxilions
By Nicholas Briggs
Starring Tom Baker and
Louise Jameson

Planet E9874 is a peaceful planet that is not technology advanced and is the home of the Tarl.  The Locoyuns who is a peaceful and more advance in technology are helping the Tarl get past the Stone Age by helping them develop rudimentary technology.  But are they or is it a plan for something else?  The Doctor, Leela and K – 9 discover that things are not what they seem.  Further to the point Leela discovers an ancient power of unimaginable strength, an ancient power that The Doctor has encountered before, that threatens to take over the minds of everyone on Planet E9874.

While I was listening to this one it did not occur to me that this was a prequel/sequel to Death of the Daleks.  Even when looking at the CD case it never downed on me even with Exxilion starring me right in the face.  It finally clicked when I heard the familiar sound of the tower from the City of the Exxilions.  That’s how my winter has gone that I totally zoned out on that fact and my mind was on other things for such an easy Classic Who reference to be missed by me.   So with that it was quite the pleasant surprise that it turned out that the Exxilions was connected to The Death of the Daleks.   All good and all but was The Exxilions a good story?

Well it was good but it wasn’t great.  It was your average primitive civilization taking on a more advance group of visitors to its planet that ends up tricking them into their bidding in this case building the obelisk that can take over the minds of the population.  You probably know how this story ends with The Doctor helping the Tarl to overcome their oppressors The Locoyuns.  Pretty simple and something we have seen and heard before.  If anything even though The Exxilions wasn’t all that original it was pretty entertaining and I did like how it tied into Death to the Daleks.  That part was really interesting as you got a sense of what the Exxilions were like and what motivated them to make that city in the first place.

While The Exxilions was an average adventure it is good to hear Tom Baker, Louise Jameson and John Leeson reprise their roles of The 4th Doctor, Leela and K – 9 and it is always good to hear more audio adventures from that era because as time goes by there won’t be many more adventures with this crew to enjoy.  So if you want an entertaining story to listen to while you go on a drive or while working on the computer then The Exxilions isn’t a bad one to listen too.
Grade C+