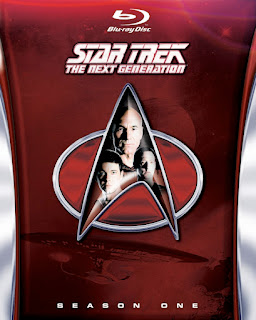 The first season of Star Trek- The Next Generation came out on Blu-ray this week and while all the talk is that the episodes look fantastic, better than they did even during broadcast, there is an audio problem.

Okay, just a quick update re: CBS's Star Trek: The Next Generation - Season One Blu-ray set. There is a confirmed audio issue that affects 7 episodes in the set - Encounter at Farpoint, Hide and Q, The Big Goodbye, Datalore, 11001001 and Too Short a Season. (Naturally, none of the episodes I watched prior to my review!) The impact is that in the DTS 7.1 mixes for these episodes, character dialogue that should normally be in the center channel is also mixed into the front left and right channels. The other episodes are unaffected. However, there's a secondary audio issue being reported as well in which the PCM audio for some of the extra features on Disc One and Disc Six plays out of sync on at least some models of Blu-ray player. CBS has begun investigating both issues. As soon as we get some kind of official word from them as to what they find to be the cause and how they're going to fix the problems, we'll let you all know.


It would appear that most reviewers of the set did not pick up on these problems.  Now while the problem is  more noticeable with better sound systems, there are other audio problems with echoing sound during some episodes.

If you were planning on buying this set you may want to hold off until the problem is fixed although I would imagine CBS, once they figure out the issue, will set up a replacement disc program for people who already purchased the set.
Posted by SHADOKP at 10:16 AM