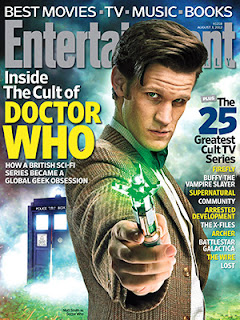 Steven Moffat - There isn't a film.  That was all some weird fantasy going on somewhere.  Look, we hope will do a Doctor Who film someday. It will be absolutely run by the Doctor Who production office in . It will feature the same Doctor as on television. It will not be a rebooted continuity. All of that would be insane. So that whole proposal was not true, did not happen. I can say that with authority because, as far as the BBC is concerned, I’m the voice of Doctor Who. So if I say it, it’s true. The BBC own Doctor Who and, for the moment, I run it for them. So I can assure you definitively that was all nonsense — not the idea of making a film, we’d love to make a film, but the idea of a rebooted continuity, a different Doctor. That’s writing the book on how to destroy a franchise. You don’t behave like that with it. Not ever.


I personally don't think Moffat has that much power over Doctor Who and while I am not a big fan of the series, a reboot happening simultaneously with the series would be bad.
Posted by SHADOKP at 10:40 AM