Following the information that several episodes on the new Star Trek - The Next Generation Blu ray release had audio issues, CBS has made the following statement: 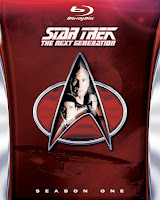 CBS Home Entertainment and Paramount Home Media Distribution are reacting to consumer complaints about audio anomalies on the new box set of Star Trek: The Next Generation, Season 1. A replacement program has been instituted and replacement discs will be sent to consumers free of charge. Following is the official press release with appropriate contact information: Dear Star Trek Fans, We have discovered an anomaly in the English 7.1 DTS Master Audio track in our Star Trek: The Next Generation Season 1 Blu-ray Box set. There are some episodes that inadvertently had their front channel designations incorrectly mapped, resulting in an undesired playback experience when listening to them in a 7.1 or 5.1 Surround Sound environment. We are quickly working to remedy the situation. Replacement discs (Disc 1, 3 and 4) will be made available free of charge. Please email phe.stng@bydeluxe.com for details regarding the replacement program. You may also call 1-877-DELUXE6 (877-335-8936) between 8am to 6pm Pacific, Monday-Friday. We strive to provide our fans the best Blu-ray experience possible and sincerely apologize for this inconvenience. UPDATE: The fulfillment firm is simply sending replacement discs to those who can verify the code on the inner ring of any of the Blu-ray discs (it's very hard to read, so having a bright light is helpful). There is no need to mail in the defective discs. According to the fulfillment firm, replacement discs will be sent within 5-10 business days after August 10.


Link to Blu-Ray.com is here
Posted by SHADOKP at 2:58 PM