The individual episode release of Deep Breath is planned for September 8 & 9 in the UK and US.  Here is the BBC America info - 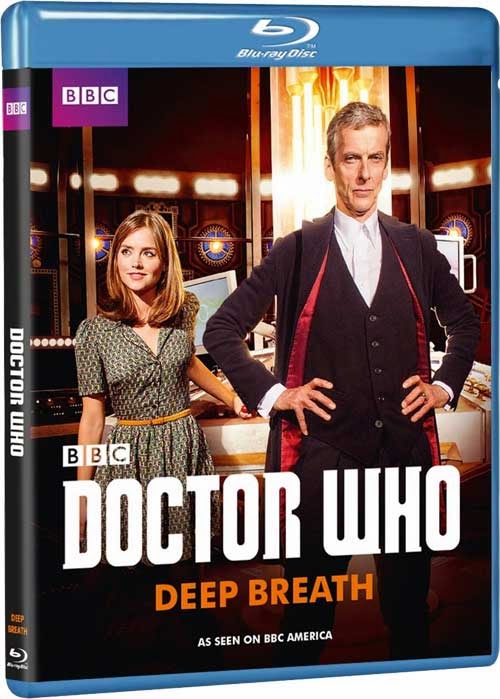 September 9, 2014
DVD or Blu-ray
New York - It's the episode everyone has been waiting for... The Doctor makes his spectacular return inDeep Breath, the feature-length season premiere episode of the hit sci-fi seriesDoctor Who. A pulse-racing adventure through Victorian London, this standalone episode arrives on Blu-ray and DVD September 9, 2014. Directed by Ben Wheatley and written by Emmy-winning lead writer and executive producer Steven Moffat, the beginning of the Twelfth Doctor's era stars Peter Capaldi as the Doctor, Jenna Coleman as his companion Clara Oswald, Neve McIntosh as Madame Vastra, Catrin Stewart as Jenny Flint and Dan Starkey as Strax. The episode premiered on BBC AMERICA and SPACE on August 23, with special theatrical events on August 23 and 25.Doctor Who: Deep Breathis the highest rated season premiere ever on BBC AMERICA.Special Features:
When the Doctor arrives in Victorian London, he finds a dinosaur rampant in the Thames and a spate of deadly spontaneous combustions. Who is the new Doctor, and will Clara's friendship survive as they embark on a terrifying mission into the heart of an alien conspiracy? The Doctor has changed. It's time you knew him.DOCTOR WHO: DEEP BREATHStreet Date: September 9, 2014Suggested Retail Price: DVD $19.98 ($24.98 in Canada)Suggested Retail Price: Blu-ray $24.98 ($30.98 in Canada)Length: Approx. 80 mins - bonus materials/ single discAbout BBC Worldwide North America:BBC Worldwide is the main commercial arm and a wholly-owned subsidiary of the British Broadcasting Corporation (BBC) operating in the U.S. and Canada. The company exists to maximize the value of the BBC's assets for the benefit of the UK license payer and invests in public service programming in return for rights. The company operates channels, a production arm, consumer products and a digital business, in addition to handling sales & co-productions. Under these businesses fall two key brands in the U.S. - digital cable channel BBC AMERICA and BBC Worldwide Productions, the production arm responsible for the smash hit Dancing with the Stars.