Doctor Who - Series 8 As Explained By Steven Moffat (Spoilerish) 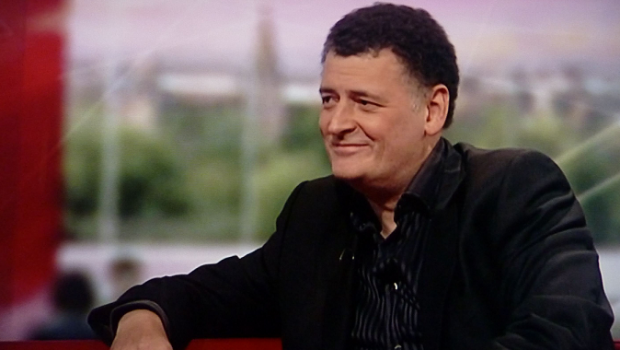 In the new Radio Times Steven Moffat does an episode guide for Series 8.  In it there are quotes that can be deemed spoilerish and a pretty good description of the episodes. So if you do not want to know then do not hit read more.  You've been warned.


Deep Breath
"Who frowned me this face?"

A slaughterhouse restaurant and a buried spaceship lead The Doctor into a confrontation with a long-forgotten foe...

Into The Dalek
"Imagine the worst thing in the universe, and then don't bother because you're looking at right now. This is evil refined as engineering."

In the dying days of a bitter war, a beleaguered army has one last hope: a Dalek so damaged it has become good.  But can it be trusted? To find out, a miniaturised team, led by The Doctor and Clara, embark on a fantastic voyage into the Dalek itself...


Robot of Sherwood
"There's no such thing as Robin Hood!"

In a sun-dappled Sherwood Forest, The Doctor discovers an evil plan from beyond the stars. But with of Nottingham at stake (and possibly Derby), there's no time for the two adventurers to get into a fight about who is real and who isn't - which is probably why they do very little else!

Listen
"What's that in the mirror, and the corner of your eye? What's the footstep following, but never passing by?"

What scares the grand old man of time? What horrors lurk under his bed? Ghosts of the past and future crowd into the lives of The Doctor and Clara; a terrified caretaker in a children's home, the last man standing in the universe, and a little boy who doesn't want to join the army...

Time Heist
"Welcome to the bank of Karabraxos."

The Bank of Karabraxos is the deadliest bank in the cosmos - only a fool or genius would tempt to rob it. Fortunately, for The Doctor, he's both. But nothing even The Doctor has encountered can prepare them for the Teller: a creature of terrifying power that can detect guilt.

The Caretaker
"Human beings have incredibly short life-spans. Frankly, you should all be in a permanent state of panic. Tick tock, tick tock."

Clara has it all under control: her life at school, her life in space; her new boyfriend and her mad old Time Lord. Everything is humming along just fine, so long as everybody never actually meets. And then, one morning, just before assembly, Coal Hill welcomes a new relief caretaker with a Scottish accent.

Kill the Moon
"The little planetoid that's been tagging along beside you for a hundred million years, which gives you light at night and seas to sail, is in the process of falling to bits."

In the near future, The Doctor and Clara arrive on a decrepit shuttle making a suicide mission to the Moon. Crashing on the lunar surface, they find a mining base full of eviscerated corpses, spider-like creatures scuttling about in the dark, and a terrible dilemma.

Mummy on the Orient Express
"Start the clock!"

Aboard the most beautiful train in history, speeding among the stars of the future, a legend is stalking the passengers. Once you see the Mummy, you have 66 seconds to live. Clara sees The Doctor at his most deadliest and most ruthless - and finally she realises she's made the right decision. Because this is their last adventure: it's time to say goodbye to the Time Lord.

Flatline
"Look, your home isn't going anywhere. And neither is mine until I figure this out."

Separated from The Doctor, Clara discovers a new menace from another dimension. But how do you hide when even the walls are no protection?

In the Forest of the Night
"D'you like the forest being in Trafalgar Square? I think it's lovely."


One morning in London, and every city and town in the world, the human race wakes up to the most surprising invasion yet: the trees have moved back in. Everywhere, in every land, a forest has grown overnight and taken back the Earth.

Dark Water / Death in Heaven
"You betrayed me. You betrayed my trust, our friendship, and everything I've ever stood for. You let me down."

In the mysterious world of the Nethersphere, plans have been drawn. Old friends and old enemies manoeuvre around The Doctor, and an impossible choice is looming over him.
Posted by DR5WHO at 11:58 AM