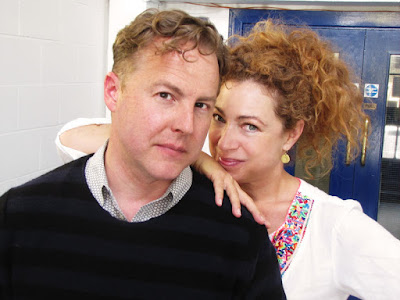 Big Finish has released the synopsis and guest stars for its upcoming 4 disc set The Diary of River Song.  We already know her future husband will make an appearance in this set when Paul McGann appears in the last story but we will be introduced to her first husband Mr Song played by  Samuel West.  You can pre order this set at the Big Finish website.
http://www.bigfinish.com/releases/v/the-diary-of-river-song-1313?range=113

An epic four-hour adventure that takes River Song across space and time, seeking out the secret rulers of the universe.

Drawn out of self-imposed academic exile by an archelological dig, River crosses paths with British Consul Bertie Potts - leading to a secret buried in a lost tomb...

2. I Went to a Marvellous Party by Justin Richards

River is invited to the most exclusive gathering; right in the middle of Hyperspace! Hosts Gifford and Isabella hold a connection to the mysterious Rulers of the Universe; but with a murderer on board, is River too late to discover the truth?

River is on the trail of mysterious, planet-killing SporeShips. Her only aid is a handsome time-travelling stranger with a connection to her future - her husband, Mr Song.

4. The Rulers of the Universe by Matt Fitton

The Eighth Doctor is drawn into events, as River must contend with a secret society and a face-off with an ancient alien force - with her future husband caught in the middle!