Doctor Who - The Fate of Krelos Synopsis 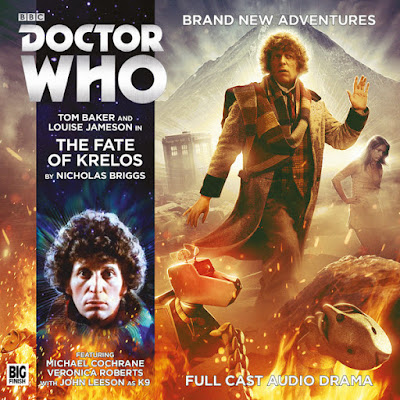 This months 4th Doctor Adventure sees The Doctor, Leela and K-9 on Krelos to do some fishing. You know something bad is going to happen to ruin The Doctor's day of fishing.  You can order this from the Big Finish website.
http://www.bigfinish.com/releases/v/the-fate-of-krelos-943

There are dark skies on Krelos… and something gigantic is descending.

Meanwhile, the Doctor and Leela set off for some fishing in the mountain pools of Krelos. K9 has interfaced with the TARDIS and has reactivated the architectural configuration from the days of the Doctor’s second incarnation. In passing, the Doctor notes it could do with a good clean. And there’s a familiar piece of material snagged on the console.

Far up the mountain, an aged explorer is in trouble. Will the Doctor and Leela be able to save him and his planet? And what is it that K9 has discovered in the TARDIS?