Details for Doctor Who - The Lure of the Nomad 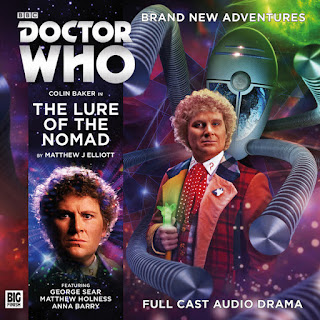 The Sixth Doctor takes center stage this month with the beginning of his three month of adventures.  This time he is flying solo so should be interesting to see how that will work out.  You can order this audio adventure from the Big Finish website.
https://www.bigfinish.com/releases/v/the-lure-of-the-nomad-1268

For thousands of years, it has drifted through space, unimpeded, forgotten, seemingly lifeless. Now, finally, it has been discovered.

Responding to a distress call from the mysterious hulk, the Doctor and his companion, space pilot Mathew Sharpe, walk into a desperate situation. The multi-tentacled semibionic Makara were tasked with renovating the abandoned craft, but now they’ve begun murdering their employers.

The Doctor soon realises that the Makara have been programmed to kill, but by whom, and for what reason? Finding out the truth will mean uncovering a secret that threatens the entire Universe.

Email ThisBlogThis!Share to TwitterShare to FacebookShare to Pinterest
Labels: 6th Doctor, big finish, colin baker, The Lure of the Nomad