There are some really cool figures coming out from Forbidden Planet.  These Era based enemy sets seem to be an exclusive to Forbidden Planet but will probably be available individually down the road.  I borrowed these images and this news from Gallifreybase and I have included some of the usual criticism and probably unwelcome comments. 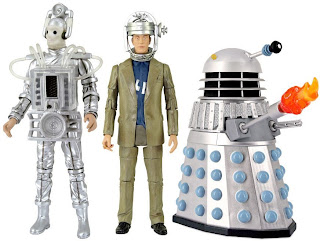 This first Doctor set includes a re-issue of the Cybermen from "The Tenth Planet" which I have and is a great figure.  I love this design of Cyberman and is probably the creepiest of the types of Cybermen.  The Roboman looks okay but you would have thought that there were a dozen more enemies that could have been done.  The Dalek is pretty cool with the flame. 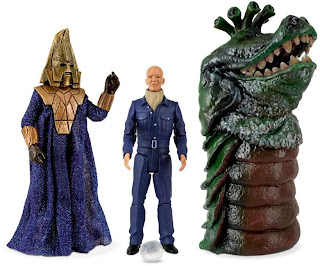 This Third Doctor Enemies set includes an excellent looking Omega (I wonder if you can open the mask?  What would you see?)  The Auton is great and the Drashig puppet is even better.  This would make a great bath toy - mmmm perhaps my daughter would like this.... 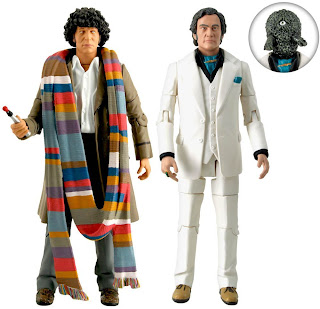 The next few sets are episode specific with "City of Death" featuring Scaroth and the Doctor.  While the Doctor looks possessed, the swapping head Jagoroth is spot on. 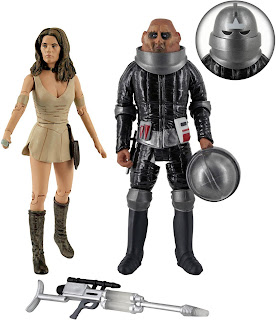 "The Invasion of Time" set includes a fairly accurate Leela and the Sontaran leader, Stor.  Not bad. 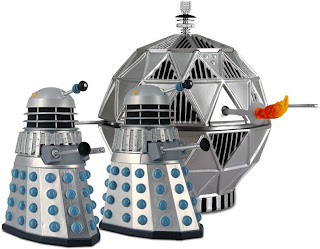 We already reported "The Chase" set which includes the excellent Mechaniods.  As mentioned before, it has been a long time since a Mechaniod toy was mad.  The last time in the 60's they were usually blue or green and not very detailed.

I don't buy that many DW figures anymore but the Mechaniod and the Third Doctor set look appealing so I may break down at some point.
Posted by SHADOKP at 12:37 PM