Synopsis For The 2011 Dr Who Christmas Special 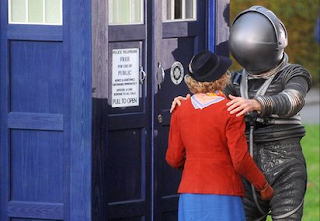 In the new Dr Who Magazine there is a cast list and and a brief synopsis of this years Christmas Special.

The special, set during the Second World War, sees Madge Arwell and her two children, Lily and Cyril, evacuated to a draughty old house in Dorset, where the caretaker is a mysterious young man in a bow tie, and a big blue parcel is waiting for them under the tree. They are about to enter a magical new world and learn that a Time Lord never forgets his debts.

Email ThisBlogThis!Share to TwitterShare to FacebookShare to Pinterest
Labels: doctor who, doctor who 2011 christmas special