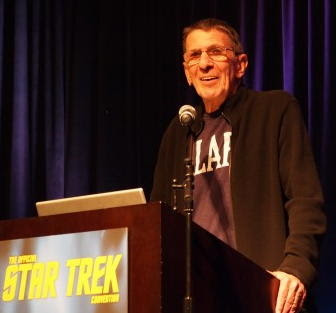 There, the man who brought sci fi icon Mr.Spock to life on the original television series in the 1960s attended what he has said will be his last convention.


His final con appearance began with a surprise video assembled by Creation Entertainment featuring all seven of the main stars of Star Trek (2009) and director JJ Abrams sharing memories and good wishes to their costar. Perhaps the best moment was Karl Urban doing his best Dr. McCoy during his tribute. When Leonard Nimoy took to the stage, the audience cheered its own good wishes for the actor who was very much the heart of Star Trek.

A wonderful presentation followed where Leonard Nimoy shared his life story through words, poetry, and pictures. Especially moving were photos of his days as a young man growing up in Boston. He shared many great experiences, discussing how various people, including Senator John F. Kennedy who was a passenger in his cab, had inspired him with their words and deeds.


When the time arrived for Nimoy to take his leave, he did so with grace and quietly, while the sold out room was filled with fans holding up signs expressing their appreciation for all that Nimoy has done. In a kind gesture, Nimoy asked that a cake be shared with the audience of fans as he signed autographs.


The 80-year-old actor, best-known for playing Mr. Spock in the original TV series that began in September 1966, formed four fingers into a V for Vulcan sign and intoned to fans Spock’s most famous phrase: “Live long and prosper.”

Posted by Harvey The Pooka at 4:38 AM