Once Upon a Time - Early Thoughts (Spoilers) 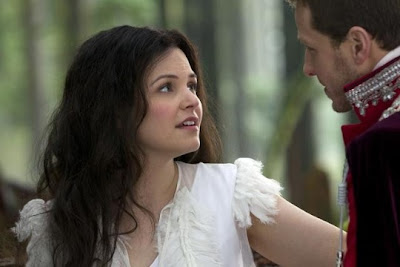 Yesterday I visited  intrigued on how ABC’s TV series about the cursed fantasy characters being caught in the real world would be handled.  A world of characters such as Snow White, Jiminy Cricket and Rumplestiltskin is cursed by the Evil Queen.  This curse propels the inhabitants of the fantasy world into our real world, .  Trapped their in the town and in time (no one ages), the characters have all lost their memory and live more mundane lives.

It is up to 28 year old Emma Swan to put things right.  She may be the only person who can break the curse.  Being the child of Prince Charming and Snow White, Emma was rescued from the curse and grew up in the real world in foster care. A young boy (her son she gave up for adoption 10 years earlier) convinces her to go to Storytown and tells her the story of the curse.  Emma doesn’t believe it but still feels the boy is being neglected by his foster mother, Regina Mills who is the Evil Queen.

Don’t worry, it is not as confusing as it all sounds.  The format will no doubt include flashbacks to the fantasy world and involve the characters we will then see in the ‘real world’. As time goes on we will probably learn if anyone in Storytown  can remember their past life and find out what Rumplestiltskin is up to. 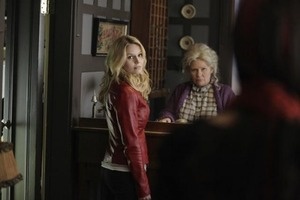 The idea is certainly original and viewers may be interested to see not only how these fantasy characters are portrayed but who they have become in the real world.  I say original but there has been other works that tread in this area including a comic book, the movie Enchanted and other series.

Writers of the TV series Lost, Adam Horowitz and Edward Kitsis, are involved in this series and sharp viewers will notice lots of Lost references including the time of 8:15 in Storytown and so on. 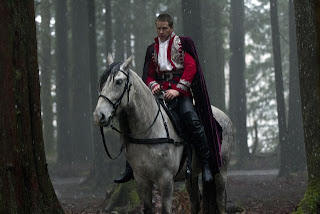 The series is different enough and has plenty of connections to Disney (even showing on a classic Disney night of Sunday).  The show can be for kids but it is not childish.  Snow White, at one point is pregnant and gives birth.  Still, family fare this is and I am eagerly awaiting to see more of this show.  Once Upon a Time was a borderline show for me and if I had time, I would give it a shot, but now it is firmly on my schedule.
Posted by SHADOKP at 8:10 AM

Email ThisBlogThis!Share to TwitterShare to FacebookShare to Pinterest
Labels: once upon a time, review