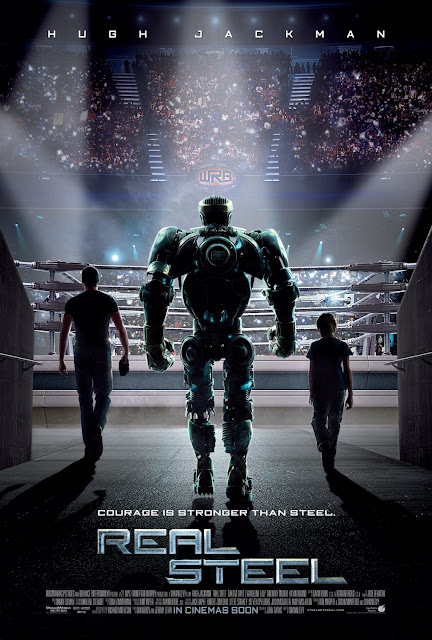 The movie that is based loosely on Rock Em Sock Em Robots that stars Hugh Jackman as a down on his luck ex boxer and now failure robot fighter.  Hugh Jackman plays Charlie who just finds out that his former girlfriend who is also the mother of his son has died. So Charlie 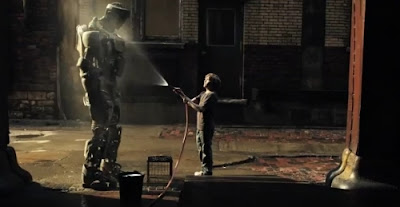 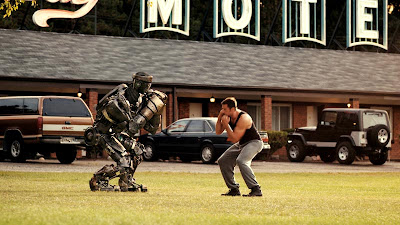 reluctantly goes to the custody hearing and negotiates to sign the waive rights to custody suit for $100,000 if he takes care of Max for the summer.  What turns out to be a reluctant relationship turns into something more as the two both share an interest in fighting robots and then begin to work together in manufacturing a champion fighting robot with sights on the big time.  After some convincing by Max, Charlie reluctantly again agrees to teach Atom (Max's robot) how to box.  They then continue on the path of fighting until they get a shot at Zeus.  The Robot Heavyweight Champion. 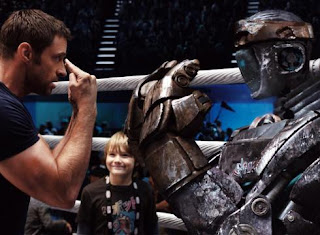 I really enjoyed Real Steel.  It was for any other word a different movie and an original thought from Hollywood for once.  I really liked the robot fighting action as it was pretty cool.  It was fun to see the robots pummel themselves and also seeing the reactions of the human operators.  Mostly when Max and Charlie bring Atom to the underground  robot fighting arenas.  If you enjoy the Rocky films then the big showdown with Zeus will be up your alley.  It was like watching the original Rocky when Rock was fighting Apollo Creed.  In fact you could say it was the robot version of it with the same ending.  Yes Atom loses to Zeus but he wins the heart of the people.  The fight between Zeus and Atom was actually quite thrilling to say the least.  I was literally on the edge of my seat watching it.  I had to laugh as I saw that the writers or director or both incorporated the Ali "Rope a Dope". For those that don't know Ali fought George Foreman in the Thriller in Manila back in the 70's.  In that fight Ali just hung on the ropes and let George Foreman pummel him.  With the hot African heat wearing on Foreman Ali waited for his moment and then strike for the win.  Well they did that maneuver in this film and I thought that was pretty clever and wondered if anyone else in the theatre knew what was happening. 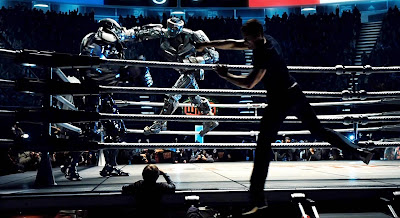 Real Steal also had a pretty good story going on.  I'm not talking about the sci fi robot fighting action or the goings on with robot boxing and the shenanigans that go on behind the scenes.  I'm talking about the story of a dad and a son getting to know each other and forming a relationship.  It was probably the best part of the film as you can see that Charlie was truly regretting his past and not being there for his son.  You can see it all taking place as they go from venue to venue and start acting like a team but more importantly acting like father and son.  Even after Charlie dumps his son back to Max's Aunt and Uncle after a run in and beat down by people that Charlie owes money to.  That's why the final fight with Zeus was so emotional as Charlie pleads with Max and his Aunt to let them have this one moment to make up for all the times he wasn't there.  A very touching moment and not what you would have expected in a movie about battling robots. 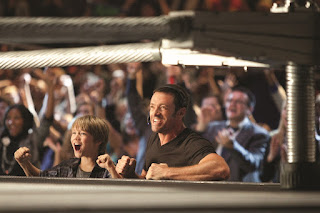 If there was one negative to this movie it would have to be the use of language in this film.  I know I'm being an old bitty.  I expected that language from the underworld people but the hero of the film didn't have to be swearing as much.
So if you are a father and want to go to the movies with your son (or daughter ) then take them to see Real Steel. It's not only a pretty cool movie with lots of robot fighting action but it is a movie that has a pretty good message about father and son relationships that I can relate to because I took my son to see this movie with me.  Plus Hugh Jackman and Dakota Goyo had great chemistry together and were really believable in their respected roles in this movie.  So Real Steel turned out to be a better movie than I anticipated and had a pretty cool story with lots of robot fighting action.
Grade B+
Posted by DR5WHO at 8:51 PM