Doctor Who Comics To Be Relaunched this Summer 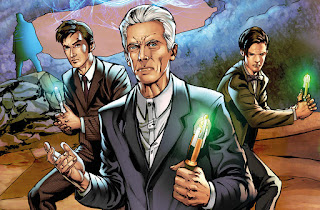 It appears all the current Titan Doctor Who comic book series will be wrapping up this month and will sterilizer later this year with a new relaunch for all it series and will also include a new series featuring Jodi Whittaker's 13th Doctor.  The sneak peak of the relaunch will happen in May when a special Free Comic Book Day comic book will be released and that will you give you the first glimpse of the 13th Doctor in comic book form.   The Free Comic Book Day comic will be Doctor Who # 0 and will be released on Saturday May 5th 2018.
Posted by DR5WHO at 10:03 AM