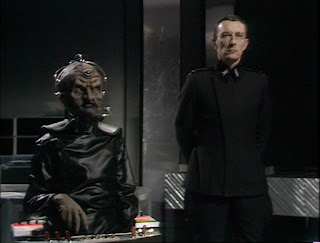 Peter Miles who guest starred in three 70's era stories has passed away at the age of 89.  Peter Miles guest starred in the stories The Silurians, The Invasion of the Dinosaurs but he was best known for playing Nyder in Genesis of the Daleks.  He also came back to Doctor Who in the 90's in the audio adventure The Paradise of Death and continued on acting in audio adventures for Big Finish reprising his role as Nyder in I, Davros.  He also had roles in Blake's 7, Bergerac and Z Cars.

Email ThisBlogThis!Share to TwitterShare to FacebookShare to Pinterest
Labels: doctor who, Peter Miles