So here we are, with a new season, a new Doctor and a promise of a new direction for the show. In my opinion Doctor Who had been improving ever so slightly in the latter parts of season 7. Concentrating more on character moments and more focused stories, there seemed to be less frantic dialog and story telling. Apart from a couple of stumbles (“Nightmare in Silver” and “The Time of the Doctor”), the series seemed to already be going in the right direction – in my opinion. Of course this was not the case for everyone but what of Peter Capaldi and the first episode of the 8th season? Fandom, take a “Deep Breath” and look beyond the veil.

The opening credits – They are certainly much different than any others from the past and I can see why fans might not like them. I don't mind the look and the music is okay – I have heard better though. Give it some time and see if it does grow on you like previous openings have.

The story – A fairly basic idea of a group of clockwork robots stealing body parts to repair their ship and themselves. This sort of reverse cyber-punk is creepy and quite dark. A balloon made of human skin is not something you would expect to see in Doctor Who. The 'cyborg' visual and sound are well handled as is the acting by Peter Ferdinando – creating one of the better 'baddies' for New Who. He is not running around yelling and screaming and over acting like so many 'baddie' actors of the past (see John Simm's Master and Michelle Gomez's Missy..... oh, more on her later). The mood setting is perfect for this with some terrific scenes at the restaurant and inside the spaceship. We don't have too many things going on and yet this story is full of layers of content making it one of the most sophisticated episodes in years. 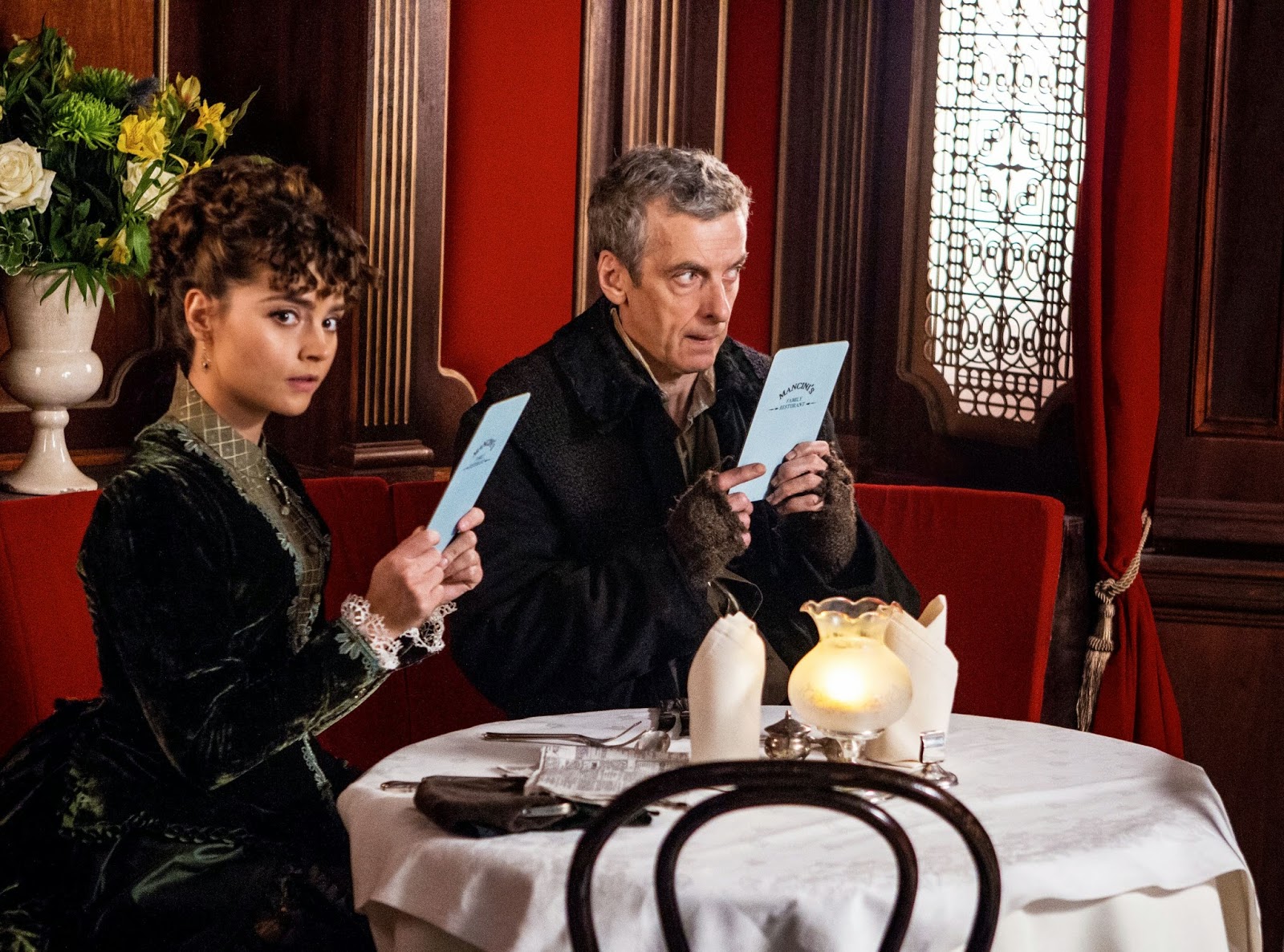 “Deep Breath” has the primary story but also the entire Clara excepting the new Doctor plot that is more important than anything in this one. Jenna Coleman is perfect and plays a companion with an entirely realistic reaction to regeneration. The regeneration is not played for laughs. Clara is seriously upset by this change. The idea that she might have known about regeneration but seems to not remember her time in “The Name of the Doctor” could be a memory thing or perhaps actually seeing it happen is still upsetting to her.

So many segments in this story emphasize the idea of seeing past veils or masks and seeing who someone really is. I felt the story was also a commentary of fandom and their acceptance of a new Doctor. Some fans, as well as Clara had trouble getting past the 'old' Doctor idea but hopefully these fans have learned, as has Clara that he is still the Doctor. 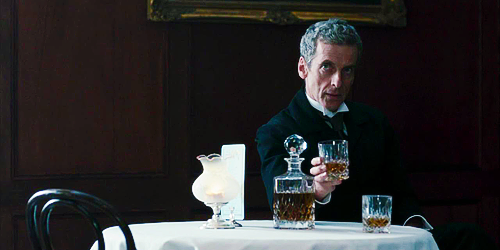 The Doctor – Everything that Peter Capaldi did in the story has endeared him to me. Not only the way he portrayed the Doctor in that Tom Bakerish and Patrick Troughtonish way but how he interacts with Clara and the bad guys. Thankfully he didn't just point the sonic at the cyborgs, yell something stupid and blow their heads off. He sits down to talk with them. That is class and that is the Doctor. Now of course we don't know this Doctor that well and I found myself, along with Clara, doubting if he is a good man. These ambiguous moments include leaving Clara behind in the ship and the uncertainty of the cyborg's fate - did he jump or was he pushed. Even the moment where Clara stuck her hand out for the Doctor, she was as unsure of the outcome as the viewer was. 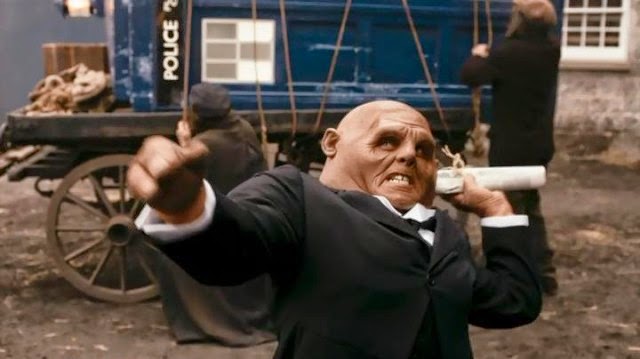 Vastra, Jenny and Strax are okay in this one. They are perfectly placed within this story and are not over used. I picked up on the fact that Vastra and Jenny were indeed married, something that must have eluded some fans as it was mentioned numerous times. I wished the writers would be more comfortable with Vastra and Jenny's relationship and not have to write them as constantly reminding one another that they are married – it seems off a bit. Just give us more scenes like their interaction in the painting room and we should be good. Strax had some good moments but he would not make a good paperboy.

Clara – There are so many excellent companion moments in this story and this character really had time to shine. Not only is her doubting the Doctor and their relationship done so well, but finally we see the beginnings of a non shipping relationship between the Doctor and his companion – a complete breath of fresh air. Obvious some fans are still crying over this. Oh well.

Her confrontation with the cyborg was another incredible moment. She was defiant and brave but admitted that she was scared out of her mind. Loyal to the Doctor and not giving him up but also willing to try to find out more about the cyborg's plans were really some excellent moments for that character.

Coleman and Capaldi have good chemistry and this is obvious in the restaurant scene as well as the final scene in the street. Time well tell as the new accepting Clara interacts with him if that chemistry will change.

One scene that in my opinion is probably one of the best in Doctor Who history is when Clara escapes from the cyborgs by holding her breath. The point of view suspenseful scene is beautifully shot and edited with terrific music. That scene really puts the viewer into the companions perspective and is the best example of this type of scare and emotion. 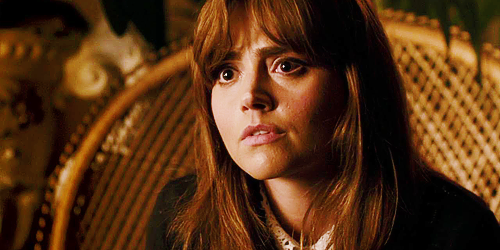 Missy – Ah yes, this is Doctor Who and so we cannot ever have a perfect episode. Yet again someone is pulling strings and yet again there is an over the top, sexually charged, giggling maniac being shoehorned into a previously near perfect episode and giving us a bad taste at the end. Obviously many fans love this sort of thing and some will find this final scene the best of the episode for the same reasons I hated it. This reminder that we have to have this type of bad guy will make many fans breath easier knowing that the 'slow' pacing of “Deep Breath” is hopefully just a one shot and that the show will go back to the usual epileptic inducing fast editing, dialog and story telling.

Pacing - The extra length of this episode allowed for more character moments and delivered the usual humor, quirkiness and flirting that many fans feel have to be in the show but it was done in a more deliberate way to allow viewers to enjoy the moment for a change. Hopefully this is one of the new directions the show takes.


After hearing some negative reviews on this story I was dreading the same old problems but they are certainly kept to a minimum. I watched this story twice because I felt the layers were worthy of a second taste and enjoyed the story even more.
Posted by SHADOKP at 12:38 PM