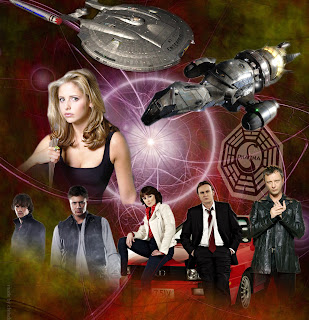 The following series of articles includes my personal top ten Sci-fi TV series within each of the past few decades. I will start with the latest decade and go all the way back to the 60's


The past decade certainly has had some really good Sci-Fi and fantasy TV series.

Included in my list are series that had the majority of their episodes between the year 2000 and 2009. Series like The X-Files and Lexx only had a couple of their seasons within that time period and so didn’t include them. I have not picked from series that I did not watch nor that I did not watch enough of the series to make a judgment. Series like Stargate SG-1 dominated the decade but I never watched enough of them rate them. I have also shied away from current running series with less than 3 seasons under their belt. Fringe would no doubt make my list but with only two seasons done in that decade, it does not qualify. Shows that ended in 2010 but started in 2009 are also eligible.
It was hard to not only come up with just 10, but to put them in order. Something I loved in 2004 I may have lost interest in later on and have put it lower on the list when compared to other things.
A lot of good shows didn't quite make it on this list but they came close. Shows like Lost and Defying Gravity were right there along with Smallville and The Sarah Jane Adventures.
This article originally was published in the Knights Newsletter back last year and has been re-done for today's blog.
So from 10 to 1 here they are – 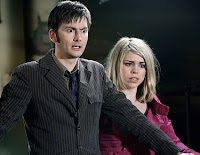 10 – Doctor Who (2005 – Present) – WOW, are you surprised to see this show this low? Yes, Doctor Who has its moments and it is one of my favorite series of all time, but not in this decade. The series is generally great but has moments of horribleness that out matches anything high on this list.    You take out several episodes and several scenes and this series skyrockets to the top. The final “specials” season was especially dismal. Since it is still going with a new direction, it has potential to improve but for now, I have 9 other series I thought were better.

9 - Dollhouse (2009 – 2010) – Another Joss Whedon project, probably known as the one that very few of his fans watched. Dollhouse starred Eliza Dushku (Faith from Buffy and Angel) as an active (doll) who is programmed to take part in special fantasies and tasks. After each mission her memory is wiped but soon she begins to remember and plots to rebel against the organization running the Dollhouses. This series had the mission of the week formula but very quickly grew a back story that rivals any of Whedon’s other works. The best writing for the fall 2009 season was with this show. Of course, being on a Friday night, the series was lucky to go 2 seasons and ended on a high note for sure. Hopefully people will discover this series later on, AKA Firefly. This series would have been a lot higher but it did start off a little rocky and took some time to get it right. 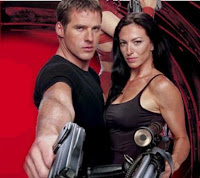 8 – Farscape (1999 – 2003) – An astronaut ends up in a distant galaxy and attempts to get back to Earth. Original, action packed and well written, this series is loads of fun with so many levels of story and drama.  I am currently re-watching this series now and am now remembering how good it really was.  I am probably regretting putting it as low on this list as I did.

7 – Battlestar Galactica (2004 – 2009) – relentless tension and drama, this series never let up and kept its ruthless style all the way to the end. The characters you feel sorry for are for the most part killed, others are found to be Cylons while other things totally grate on your nerves and yet the show kept going and did not waver. Brave is what this series is all about. The ending, like with Star Trek -Voyager and Enterprise is not quite up to the rest of the series but in this case, not as important to me anyhow. The dragging out of the series in TV movies and a prequel is not something that I am enjoying as much. 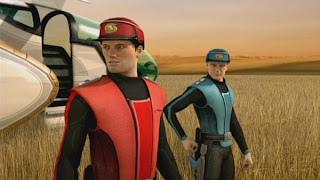 6 – The New Captain Scarlet (2005) – An new war is being waged on Earth by the Mysterons. Using replicated people, the Mysterons unleash havoc. This is a series on this list you probably never saw. It never aired in the United States and was handled poorly in the UK, not because it was bad. The CG animation, in my opinion is better than most of the animation in Star Wars – The Clone Wars and Captain Scarlet was made 3 years earlier with less money. The stories are action packed with a good amount of drama and comedy mixed in there. Will it ever get another chance? Someday perhaps. 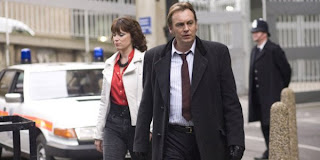 5 - Ashes to Ashes (2008-2010) – A woman is shot and wakes up to find herself in 1983. She attempts to figure out why she is there and discover the truth behind it all. This sequel to the excellent Life on Mars (further up on this list) ended up being nearly as enjoyable and interesting as the first.  The first 90% of the first season was far from the classic of Life on Mars but redeemed itself to a great deal in season 2 and 3.  The finale really solidified the series and brought home an excellent conclusion to the entire Life on Mars – Ashes to Ashes universe. 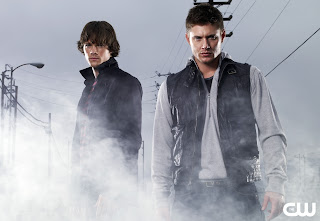 4 – Supernatural (2005 – Present) – Two brothers combat demons and whatever else that threatens man kind. One of the things that a TV show has to do to get onto my list is to surprise and entertain and most of these do. Supernatural is definitely one of these series. More often than not I watch an episode and am instantly reminded of why I like the series – I don’t have to think back to season one and find examples. The most recent season started off a bit oddly but has ended stronger than it ever. Anyone with a close sibling should watch this series. 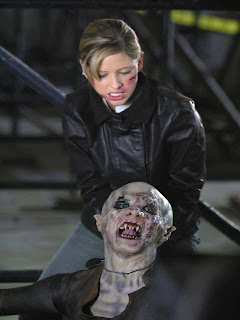 3 – Buffy The Vampire Slayer (1997 – 2003) – A girl is chosen to be the vampire slayer. The writing for this series is the best of almost all of the series in this list. Year after year this show was just so enjoyable to watch. I have never laughed so hard than watching any other show and I have never cried so hard, than watching any other show. I am re-watching a few episodes now and continue to marvel at how good this series is. Could easily have been number one on my list but I have to give the slight edge to two others.

2 – Life On Mars (2006 – 2007) – Sam Tyler is hit by a car and wakes up in 1972 and tries to figure out if he is in a coma or something else. This is the UK version of course. This series was near perfect. It had so much to say and I took it in completely. I may enjoy watching others on this list over and over and over again but Life On Mars was well constructed and had great messages throughout. The humor and the characters brought to life with some great acting certainly helped. Could have gone on longer but the sequel, Ashes to Ashes, approaches some of the greatness of the series. BTW, The US version of Life on Mars sort of captured the essence of this series and if it had ended within the context of the ideas of the series, it would have made my list as well. Trust the Gene Genie on this one!! 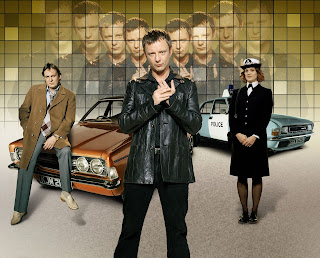 1 – Firefly (2002) – What a great concept executed perfectly with the cast, tone, stories and effects. Creator Joss Whedon’s masterpiece had everything just right. Within just a couple of stories I already knew the characters and I got the story and I was right there along with him. To see these shows that are obviously some of the best things out there not get the recognition they deserve is saddening to me and a few series on this list fit that category. None more so than Firefly. Still, the show became more popular after it was cancelled and with the incoming fans called the Browncoats and the movie Serenity, the mysticism of this series dropped a bit. Its still number one on my list though and that is saying a lot. 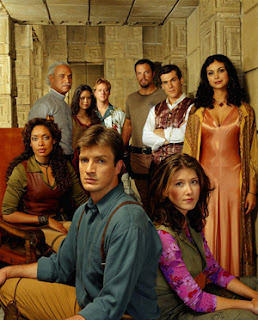 This order is not set in stone and I find myself shuffling some of these series around as I was writing this. I re-did the list at list 10 times with some shows moving way up and others way down. That is the fun of this list as things change and perhaps in a year the list will be different.
There are a few shows that dropped off the map – these are shows that I could not stick with, either I lost interest or just did not have the time. Andromeda is certainly one of these and based on the first couple of seasons may have entered my top 10 list even. Some writing changes turned me away and I never had time to re-investigate the later seasons. Lexx is debatable as it went from 1997 – 2002 with 4 seasons but the excellent first two seasons and the good third season ranking is destroyed by the horrible fourth season piece of garbage. Since that was in this decade I cannot put Lexx on the list at all.
Buffy The Vampire Slayer is right in the middle of two decades and so I placed it in this one as I watched most of the series in this decade - if that makes sense.
So that is it. Feel free to agree or disagree with comments.  Up next will be the 90's.
Posted by SHADOKP at 11:23 PM