Doctor Who - Touch By An Angel Book Review 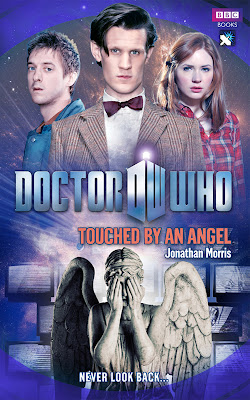 Doctor Who
Touch By An Angel
By Jonathan Morris


Mark Whitaker is a grieving widow who lost the love of his life in a car accident in 2003.  He then receives an envelope that has “You can save her” in the message.  Confused and perplex mark seems to be aware that something is watching and following him.  Something that is sinister and really nasty.   Then Mark bumps into The Doctor who seems to arrive at the right time to save Mark from a Weeping Angel image in a TV in a store display.  That intervention is short lived as The Angel gets Mark at his apartment and sends him back in time to before he met his wife Rebecca and that note and envelope make sense.  But the Doctor finds this out and it’s up to him and Amy and Rory to go back in time and prevent a time stream problem that will feed energy to The Weeping Angels.

Sometimes stories do not have a happy ending.  Yes The Doctor saves the day but Mark doesn’t get to save his wife’s life.  That’s the sad part as it’s a fixed point in time and the Angels are using Mark to get energy from the changed timeline.  I really enjoyed this book even though it had a bummer of an ending.  I liked how the author made you feel Mark.  If you are married and lost your wife or husband and had the chance that Mark had would you try and change what happened.  Not sure what I would do but it is a good question.

There are a lot of good scenes in this book that are really creepy and of course involve The Weeping Angels.  Scenes that will make you squirm and wonder how The Doctor and crew will get out of those situations.  The conclusion to the book was pretty clever and pretty sad because you do know what has to happen but doesn’t make it any easier.

Another reason I enjoyed this book was the fact that it wasn’t complicated at all.  It is a well written book with interesting characters and everyone involved has something to do.  The TARDIS crew is handled really well and Rory and Amy have plenty to do and are not shoved to the back ground.  I can easily see this book as an episode on TV.  It is that good.

So in closing Touched By An Angel is a very interesting and different type of book that pulls at the heart strings.  It is very enjoyable and well written and worth a read by the most dedicated of Doctor Who fans.

Email ThisBlogThis!Share to TwitterShare to FacebookShare to Pinterest
Labels: doctor who, Doctor Who Books, Weeping Angels