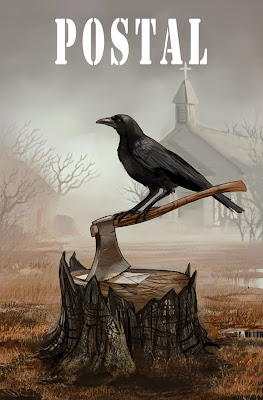 Writers Matt Hawkins (THINK TANK) and Bryan Hill (Broken Trinity: Pandora’s Box) and Top Cow’s Talent Hunt winning artist Isaac Goodhart team up for a crime thriller that will keep readers guessing and coming back each issue for more in Top Cow’s POSTAL—coming this February. In a small sleepy town full of fugitives in hiding, who would risk exposure to the authorities by committing the town’s first murder in decades? And how will the FBI exploit one individual’s weakness in order to get the evidence they need?


The town of Eden, Wyoming operates as a haven for the worst criminals at-large, seedy characters who remain in town only long enough for new identities—often including facial reconstruction—to be created for them. There is zero tolerance for any illegal activity that might draw attention to the town and an “official murder” is the last thing they want. A single, tight-knit family runs Eden, with the youngest oddball son Mark Shiffron overseeing the postal branch, the only means of shipping in or out of the city. Although the FBI’s attempts to insert an undercover agent in the town have been repeatedly foiled, this murder gives them a new opportunity.

"Postal is essentially WitSec for criminals,” said Hawkins. “It's about a remote town that creates new identities for them so they can avoid prosecution. Working with Bryan Edward Hill and Talent Hunt winner Isaac Goodhart on this first volume so I know it will be top notch!"