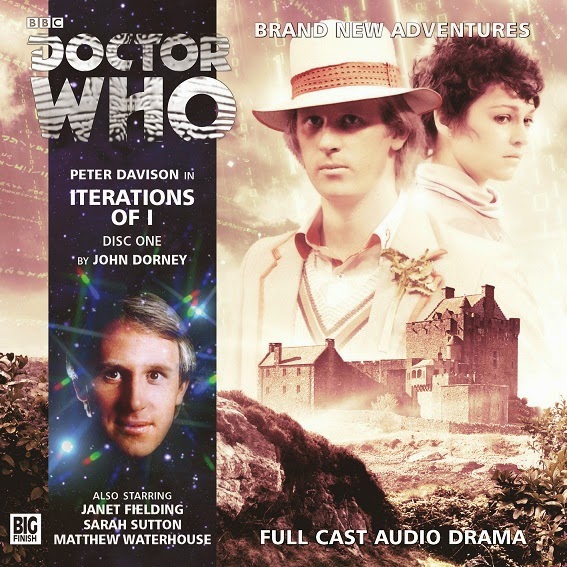 The Doctor walks into the consul room and finds Adric and Nyssa trying to fly the TARDIS and land them at Heathrow airport in 1981 hours before Tegan has to catch her flight.  As with all things concerning the TARDIS flying her is harder than it looks as the TARDIS does not materialize at Heathrow but instead on a cliff edge on Fleming Island.  There is something odd going on at the island as it appears to be haunted and someone has gone to a lot of lengths to keep whatever it is on the island.  That is until The Doctor and his traveling companions Adric, Nyssa and Tegan stumble upon it and unwittingly set it free.  Now it’s up to them to prevent it from leaving the island and wreaking havoc on the main land.

The second story from the 5th Doctor Box Set is Iterations of I.  It takes place further along in the era where Tegan is ok with traveling with The Doctor for a bit and the companions seem to be use to each other unlike the first story Psychodrome.  This story also is a lot scarier than the previous story as it is a pretty good horror story to go along with the science fiction.  It was also a pretty clever story also using numbers or a new type of number to be the main catalyst for this story.  Since this was taking place in 1981 the new type of number was trapped in a computer.  Now remember there wasn’t any internet yet and networking computers wasn’t done all that much if at all at the time so the I number did not have anywhere to go.  So now that it is out The Doctor has to come up with a way of getting it back into the computer program that it was trapped in.

The resolution of the story was not what I was expecting as it involved someone making a sacrifice. I shouldn’t divulge who does make it but you pretty much can guess it is Jerome when listening to this story.  Iterations of I should also be credit for giving Adric a backbone and some guts to fighting back when he was about to be kidnapped and used as a hostage by Robert DeValley.   It was a good twist to have Robert ulterior motives to be about using the I to get rich as it was the greedy 80’s after all. But it did throw me for a loop with that revelation as I was not expecting it.
I did like the horror aspect of this story. It was pretty creepy during the first two parts of this story with Nyssa having a psychic attack and having her susceptible to the I was pretty creepy.  Especially when she was just repeating I over and over and no one was picking up on it.  The creep factor was pretty high in this story.

I really liked Iterations of I as it was a really good story that mixed in horror with science fiction.  It also pushed The Doctor to the limits as he tried to find a way to stop the I.  It was filled with lots of good performances by the 1981/1982 TARDIS crew and even though they are older they still have the magic to bring their characters to life and that was a key factor into making this box set a must buy for fans of the 5th Doctor and for Doctor Who fans in general.
Grade A