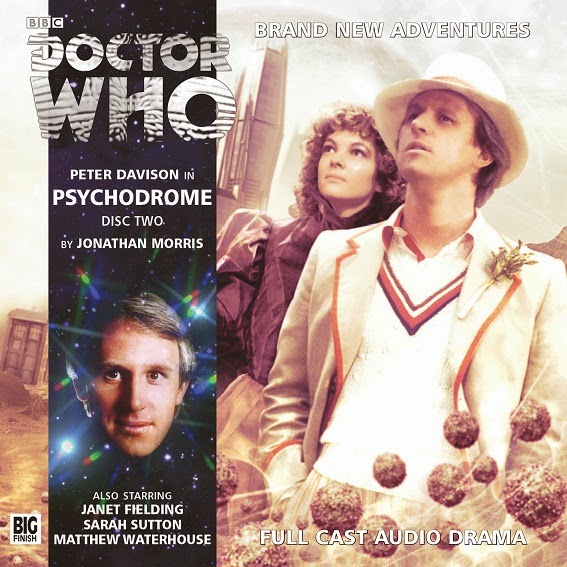 After the events of Castrovalva Tegan is trying to get use to the way her life will be until The Doctor can get her back to Heathrow before her flights departs.  In the meantime Adric is showing her to her room that once belonged to Romana and informed her that she can decorate it anyway she sees fit.  In the meantime the TARDIS seems to have materialized underground and that has piqued The Doctor’s interest.  The four travelers head out to explore and soon the Doctor notices things are not what they seem.  For once the TARDIS is being carried off by what looks like savages from Earth’s past and there also seems to be four groups of inhabitants all different and each representing different times.  But that is not the worrying part as each group seems to be a part of the consciousness of The Doctor, Adric, Nyssa and Tegan.

The Fifth Doctor Box set is a special release this year by Big Finish.  Big Finish seems to be doing more box sets lately as last year the came out with The UNIT Box Set starring the 7th Doctor and of course the Dark Eyes Box set that stars Paul McGann as the Eighth Doctor.  This year they have up the ante by releasing a few box sets with Bernice Summerfield and The Worlds of Doctor Who with Colin Baker and of course another Dark Eyes set.  I enjoy getting the box sets as it gives the buyer two stories from that particular era to listen to and you get a bonus release during the year that isn’t in the regular rotation.  Being a fan of the Fifth Doctor I was overjoyed that they were doing a set for Peter Davison and equally happy that they finally were bringing in Mathew Waterhouse as Adric into the fold.  The First review will be on the first story Psychodrome as I will review both stories separately.

Psychodrome  is written by Jonathan Morris who is no stranger to those who enjoy the Big Finish Doctor Who Adventures.   It takes place after the events in Castrovalava and there appears to be some angst among the companions.  For one Tegan doesn’t want to be there and she hasn’t had the opportunity to really mourn her Aunt Vanessa yet.  Same with Nyssa who is still coming to grips with her father’s body no being used by The Master and Adric is getting used to the new Doctor as he really liked the old one.  This aspect is pretty good as we didn’t really have a chance to explore this in the television series.  Tegan never had a proper introduction and was thrown into the thick of it without really giving her a chance to get to know her traveling companions.  It gives us a chance to know how Tegan really feels about her predicament during the early stages of her time on the TARDIS.

Another good part of Psychodrome and one of the reasons I like this story is that it plays on what people think of one another. Here we have a situation where the inhabitants of the Psychodrome are aspects of the mind and what each person thinks of the other. So we have characters walking around of what Tegan thinks her companions are like in her mind and Nyssa’s interpretation and so on.  So Adric , Nyssa,Tegan and The Doctor all see what they each think of the other.  Talk about an awkward situation.  What was also good is that the four traveling companions had to work past that and work together to get out of the situation they were in.  Plus the author added in the extra wrinkle of having them face their worst fear.  That worked really well also and added some extra tension into the story.

Big Finish did a really great job in creating the feel for this era as it felt like a story from 1981/1982.  The music even sounded like it was from that era.  It really did and it sure added to the atmosphere of the story.  The music was key as it had all the nuances that you would expect from a story from that part of Peter Davison’s era.  It was also good to have Mathew Waterhouse back as Adric.   Whether you liked him or hated him it was good to finally have him in a Big Finish story.  I believe of all the living companions he might be the only Classic Who companion who hasn’t done one yet.  Well what was disappointing is that Mathew Waterhouse does not sound much like Adric.  Oh the whining is there but since he is now much older his voice doesn’t have that youthfulness to it.  But in all it is still him and after a while you don’t even think about it much and it is Adric coming from the speakers.

Psychodrome is an excellent story that raises some good questions about the companions and what they think about one another and especially The Doctor.  It also pits them against themselves in a way as they are fighting off what lurks in their subconscious.  It is a really good story that is worth listening to and a good start for the Fifth Doctor Box set.
Grade A