Doctor Who - The Trial of a Time Lord: Mindwarp Review 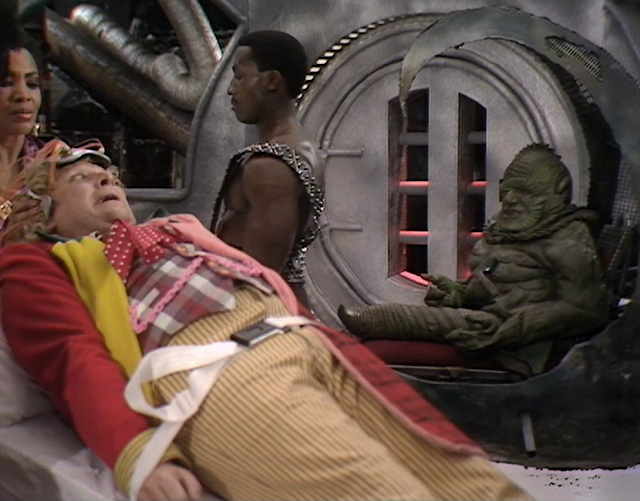 Doctor Who:
The Trial of a Time Lord
Mindwarp
By Philip Martin

“I should now like to present the Doctor's next frightening adventure. In fact, the one in which he was engaged when removed from time and brought to this court.”

On the Matrix screen we see The Doctor and Peri arriving on Thoros Beta to investigate why there are high grade weapons being distributed from the ruling party.  While investigating in the caves The Doctor and Peri see a familiar foe in the repulsive form of Sil.   While watching Sil further to see what is going on The Doctor notices the scientist Crozier.  Crozier is an expert in transferring the brain from one body to another and Sil wants him to help to do that to Sil’s leader Kiv who is dying. 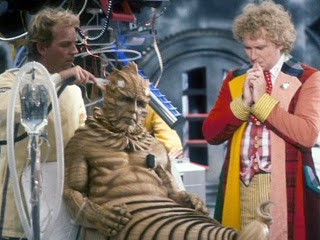 The Doctor helps King Yrcanos to escape and tries to get them to help in stopping Crozier.  But things don’t seem to be going as planned as The Doctor seems to be double crossing everyone to make it think he is helping Crozier. Then things start getting out of hand as Peri who has been captured by Crozier is now getting prepped for surgery to have Kiv’s brain put inside her head.  That’s when the Time Lords act and take The Doctor out of equation and bring him to trial and use King Yrcanos to kill everyone in Crozier’s lab including Peri.  The Valeyard evidence against a now distraught Doctor looks to be very favorable. 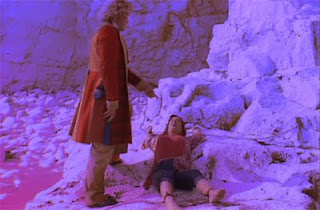 Mindwarp is episodes 5 to 8 of The Trial of a Time Lord and it is my least favorite story of this season.  I am not a big fan of Sil and I can’t stand him.  Didn’t like him in Vengeance of Varos and the character never did catch on with me. So imagine when they have two Mentors in this story and for me that is just two to many.  Plus Brian Blessed is way over the top than usual.  I like Brian Blessed especially in Black Adder but man he was hard to take in this story and that is too bad.  He did have some good moments in Mindwarp like when Yrcanos was charging into battle but I just found it hard to believe that he would be crushing on Peri.  Yrcanos just didn’t seem realistic to me and wasting Brian Blessed on him is a shame as he was another of John Nathan – Turners we need a big guest star blunders. 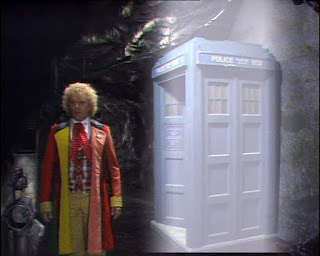 With that being said and that this story isn’t a favorite of mine that doesn’t mean that this story isn’t any good.  In fact Mindwarp is pretty decent and it sets up quite a few things for the trial than The Mysterious Planet did.   Mainly what it sets up is why the Time Lords took The Doctor out of time and why he was by himself when he arrived there.  Plus you get a hint of more tampering as we see scenes that The Doctor doesn’t remember which we find out later that they were doctored by The Valeyard.  Mindwarp gives us a lot more to ponder about the trial and gave the fans a lot to discuss.


One of the big things that happened in Mindwarp
is that the fans were left thinking that they had killed off Peri.  Later on we would find out that Peri wasn’t killed by Yrcanos but that was an image doctored by The Valeyard.  I think they should have left it the way it was and that John Nathan – Turner shouldn’t of gotten cold feet and changed it later on in production.  Even Nicola Bryant didn’t want it changed as she thought it would have been better that way.  In fact it would have been better for the story and the whole trial to have The Doctor going after The Valeyard for killing Peri.  It would also help with the consequences of what The Doctor’s actions could have on his companion and how his interfering can cause harm. At the time when most of us watched Mindwarp for the first time Peri’s death by the Time Lords was a pretty shocking moment of the trial until the cop out reveal in part 14.

While I’m not a big fan of Mindwarp, as I just could not really get into the flow of the story, the plot and what they tried to do actually worked for The Trial of a Time Lord storyline as it gave Doctor Who fans some more insight of what the trial was getting to and what consequences it could have on The Doctor.
Grade C+