Class - For Tonight We Might Die Review (Mild Spoilers) 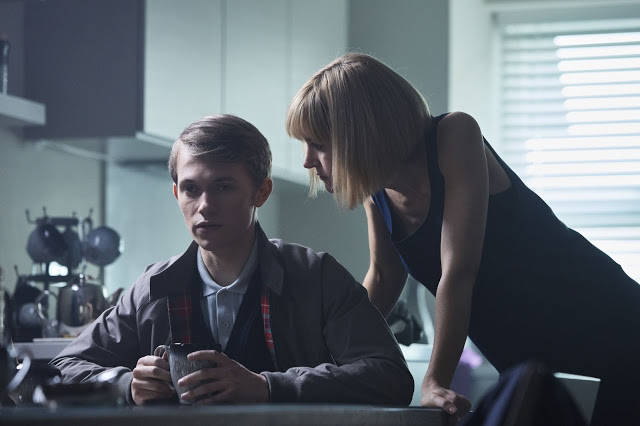 Class:
For Tonight We Might Die
By Patrick Ness

So here we are with the beginning of a new spin off series of Doctor Who with Class.  Doctor Who has had two successful spinoff series with Torchwood and The Sarah Jane Adventures and now we have Class written by Patrick Ness and available on the streaming channel that is BBC 3 and iPlayer.  Class is the creation of Young Adult author Patrick Ness and Steven Moffat has tapped him to come up with this series of eight episodes that takes place in Coal Hill School.

For those not familiar with Coal Hill School it was first introduced in 1963’s An Unearthly Child. The Doctors granddaughter Susan was enrolled there and caught the curiosity of two of her school teachers Ian and Barbara and well you know the rest of the story.  Coal Hill School would be featured again in 1988’s Remembrance of the Daleks and would be a focal point in NuWho as Clara would have a teaching job there.  So now we have a new series taking place at Coal Hill School with a bunch of students and one teacher as its protector all with The Doctor’s blessing. 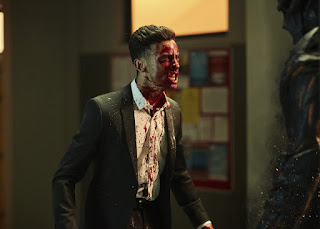 The first episode of Class is what you would expect from a debut story.  We get to meet the main players and find out who Miss Quill and Charlie are.  They are obvious aliens as it was pretty obvious watching Charlie in the opening minutes bumbling around trying to fit in by learning British high schoolers mannerisms.  We are also introduced to Ram who is the star soccer player, Tanya who is super smart and was skipped up to a higher grade and April who seems to be lacking confidence in herself and apparently can’t get a date for the prom.  But we find out that April gets herself into trouble as she and Miss Quill are confronted by the Corakinus who is the king of the Shadow Kin. While trying to kill Corakinus something goes wrong when Charlie tries to prevent it and now April and Corakinus share the same heart. The heart belonging to April as now the two are paired and if one dies so does the other.

Class wasn’t really what I was expecting.  For one I wasn’t expecting it to be as violent as it was and wasn’t expecting to see so much blood.  I for one thought this was young adults but I guess I was wrong.  Well it sure isn’t for kids that’s for sure. It also was pretty darker than I imagined it would be also which isn’t a bad thing as I enjoy darker stories from time to time. As a first episode it more or less did what it was supposed to do as it did set up the characters that would be lumped together and the way they did it wasn’t bad as they had to help each other against the Shadow Kin. 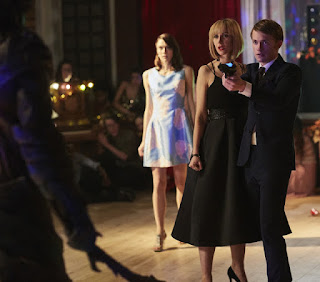 The impression I got from watching “For Tonight We Might Die” was that it was a bit like “Buffy the Vampire Slayer” and other shows like that.  Unfortunately Buffy did it better and the characters were a lot more likeable when that show started.  So far the characters in Class are not that likeable yet and watching the first episode I didn’t get a sense of caring about what would happen to them.  But it is early and there are seven more episodes to go so there is a lot of room for development and change down the line.  Class has promise as the premise is promising and interesting with kids getting together with the two aliens who have the knowledge and technology to help fight whatever threatens the school. As long as it is written well and doesn’t get to political with issues and relationships taking the center stage it should be an interesting distraction until we get the new series of Doctor Who every year. 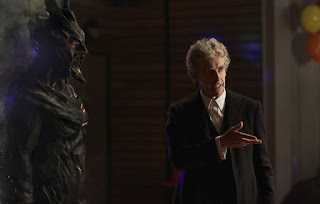 With that said I really did enjoy seeing Peter Capaldi in “For Tonight We Might Die” even though I thought it wasn’t really needed.  They didn’t need The Doctor for the beginiging of Torchwood and Sarah Jane Adventures as The Doctor guest starred in Sarah Jane well after it was established and never appeared in Torchwood.  So why have him in Class? Where they really that concerned that no one would get the fact that this was a Doctor Who spinoff?  I don’t know but having The Doctor asking this group to defend Coal Hill School why he isn’t around was good to get people to watch Class since it is only a streaming channel show.

Class has started and so far episode one of eight was ok and nothing we haven’t seen before and actually much better but it does have time to grow and get better and hopefully the characters grow too as they seem to be just stereotypical kids that you would not really see in any high school.
Grade C+

Email ThisBlogThis!Share to TwitterShare to FacebookShare to Pinterest
Labels: Class, Doctor Who Spinoff, For Tonight We Might Die, Peter Capaldi