Details For Torchwood One - Before the Fall 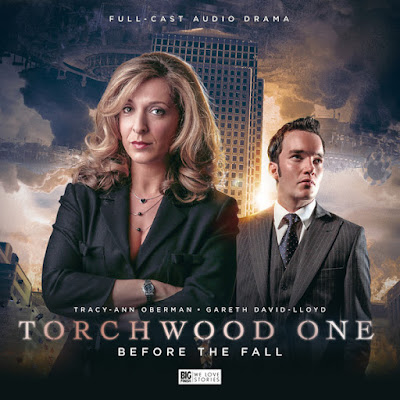 Out now from Big Finish is a special Torchwood release that tells the tales of Torchwood before the Cynermen and Daleks appear. This should be an interesting release as the previous Yvonne Hartmen release was really good.  As usual you can order this release from the Big Finish website.
https://www.bigfinish.com/releases/v/torchwood-one-before-the-fall-1571

London, 2005. Yvonne Hartman is the undisputed head of Torchwood One. Above the government, beyond the police, she has excellent people skills; enjoys regular tea with the Queen; and effortlessly defends the British Empire from alien threats.

Yvonne Hartman is excellent at her job, and inspires devotion in everyone who works with her - until, one day, she makes a terrible mistake. We all make mistakes. But only at Torchwood can a single mistake plunge your world into interstellar war.

Yvonne Hartman's facing the fight of her life. One she's going to win.

“They’ve been coming to us for years. And we’ve been kept in the dark. My name’s Rachel Allan. And I’m Torchwood”

It’s Rachel Allan’s first day at Torchwood. Torchwood only takes the brightest and the best – and Rachel’s wondering if Yvonne Hartman’s made a terrible mistake in picking her.

Plunged into a world of alien invasions and office politics, Rachel’s desperate to fit in. For one thing, she really wants this job. And, for another, she knows what happens at Torchwood if you fail.

Through The Ruins by Jenny T Colgan

“Ianto, please. It’s all… it’s all gone wrong. I don’t know what to think any more.”

Away Days at Torchwood aren’t what you’d expect. Yes, there’s the forced camaraderie, the team-building exercises, and the chance for long-held rivalries to boil over. But Torchwood Away Days also have the potential to get very lethal very quickly.

Yvonne Hartman’s extremely worried by this year’s Away Day. But she’s got other things on her mind – something’s very wrong with Torchwood.

“Torchwood. It’s taken the best part of a month, but I’ve finally got things running how they should be. How they should have been all along. ”

Torchwood has experienced some radical changes, but things are finally settling down. Everyone has pulled together and is trying to put the past behind them. Well, except for Yvonne Hartman – she’s out to win the future.

There’s one problem. Someone seems to have started an interstellar war. Someone who knows Torchwood from the inside out.