Tom Ward on Captain Latimer From Doctor Who "The Snowmen" 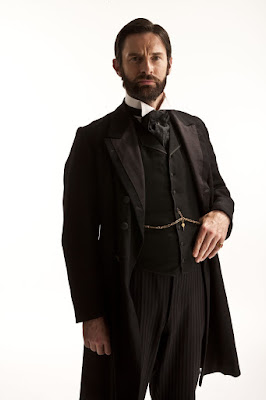 Here is another interview from BBC Media Centre for the Doctor Who Christmas special.

Tom has been star of Silent Witness for over 10 years, so that Doctor Who presents a departure for him - from the modern day to the world of sci-fi. Here he explains what we can expect from his character and whether he will be watching on Christmas Day.

"He hasn’t been used to dealing with his children," explains Tom, as he reveals a small insight into his character, Captain Latimer. "He wants to love them, but he is an old naval captain that has struggled to build a relationship."

Tom plays an archetypal Victorian gent, complete with a rather good beard. "Yes it is," laughs Tom, as he confirms the beard is real. "You often get the obligatory moustache in a Victorian drama, but I wanted to go further and the beard seemed appropriate."

Having spent 10 years in a drama not necessarily accessible to his children, Tom reveals he is excited to have done something they can watch. "My children are very excited that I am in Doctor Who and I am glad they have something that they can finally watch! My oldest child is 10, so this will give him bragging rights at school and hopefully me a little bit of school gate currency."

So what drew Tom to the role? "It was one of the best scripts I had read in a long time, and the thought of doing a period sci-fi was really fun."

With Tom admitting that his Doctor is Tom Baker, he expresses admiration for current Doctor, Matt Smith. "He is brilliant. He kept the set feeling happy and is full of energy," says Tom. "He has a great relationship with the crew." As well as co-starring Tom, the Christmas episode will also feature Richard E Grant. "I had one scene with him," explains Tom, "and he was a legend. An absolute delight."

In this episode we also meet Clara, played by Jenna-Louise Coleman for the first time. "She is a brilliant actress," says Tom, "full of life and energy, so funny and has a great rapport with Matt."

With Tom confirming that his children are fans, will he be watching on Christmas day? "We have just moved into the country, so it will be the family round and the fire blazing. I don’t normally like to watch myself on TV, but this time I think I will make an exception..."

Email ThisBlogThis!Share to TwitterShare to FacebookShare to Pinterest
Labels: 2012 Christmas Special, doctor who, Doctor Who - The Snowmen, The Snowmen