A Superhero for the Millennial Generation in THE BOUNCE‏

Jasper Jenkins is a pretty typical 20-something -- who just happens to have gained superpowers through very surreal circumstances. When he's not hanging out and doing a lot of nothing, Jasper puts on a costume and hits the streets as The Bounce, a superhero in a world that's not used to super-powered heroes and villains. And it’s this slacker and this world that Joe Casey (SEX, BUTCHER BAKER THE RIGHTEOUS MAKER) and David Messina explore in their super-sized Image Comics graphic novel THE BOUNCE, out this winter.

Jenkins may be a slacker superhero, but THE BOUNCE is loaded with depth, as Casey and Messina explore what would make a person put on a costume and fight crime, and what it’s like for him — and a handful of other newly super-empowered — to live a double life. Throw in some good old-fashioned superheroic action, and you have a superhero comic for the 21st century, reimagined, revamped, revved and ready to impart its secrets.

THE BOUNCE collects all 12 issues of the groundbreaking series. It will be in comic book stores on November 19 and in bookstores on December 2. At the launch of the series, writer Joe Casey talked about his creation in a mini-interview on the Image Comics website:

Tell about your protagonist -- who is Jasper Jenkins?
Japser's a fairly normal guy in his early 20's who finds himself living a double life as a masked superhero. But that doesn't stop him from living life at his age. There's still a lot of hanging out that needs to be done. Of course, he's got a brother who works in law enforcement, so keeping his secret identity secret becomes a top priority. But that's okay, because they don't really get along anyway. But getting busted would really harsh his mellow. Meanwhile, he's got friends that he cares about; they're his surrogate family. Plus, there's a girl he's interested in... and he met her through the Internet! So the character really has it all going for him... a perfect example of a modern, 21st Century guy.

What about a "slacker super hero" captured your imagination?
I'm not sure if I've seen one depicted as realistically as this. As a storyteller, you pose the question, "What would it be like if you were a typical guy in your early 20's and you had superpowers?" and then you try to answer it honestly. Spider-Man did it so well for the 1960's; through its stylized storytelling, it at least felt like teenage life, especially to the kids who were reading it at the time. So for THE BOUNCE, we're going for something that feels just as authentic, but for right now. In our case, that involves a lot of hanging out with your friends, shooting the shit, getting pleasantly baked, watching TV, nightly clubbing, chasing girls, avoiding any heavy responsibility... that's generally what we do at that age. Placing a bona fide secret superhero identity -- and all the baggage that involves -- in the middle of that is interesting to see.

Your other superhero title, SEX, explores a darker side of the superhero archetype. What aspects of the superhero genre are you highlighting in THE BOUNCE?
The fun aspects, I hope. The craziness of being young mixed with the craziness of being a superhero. No one seems to get it right any more. Kirkman's Invincible, maybe. But this is a lot more grounded than that book has been for a while, more street level stuff. There's a vibe that you get from just flipping through a comicbook when you're at the store, and we want this one to have good vibes emanating from the pages. Granted, it's a Mature Readers book, but there's a reason for that. Sometimes the idea of "fun" can get a little heady... as it does right off the bat in issue #1. 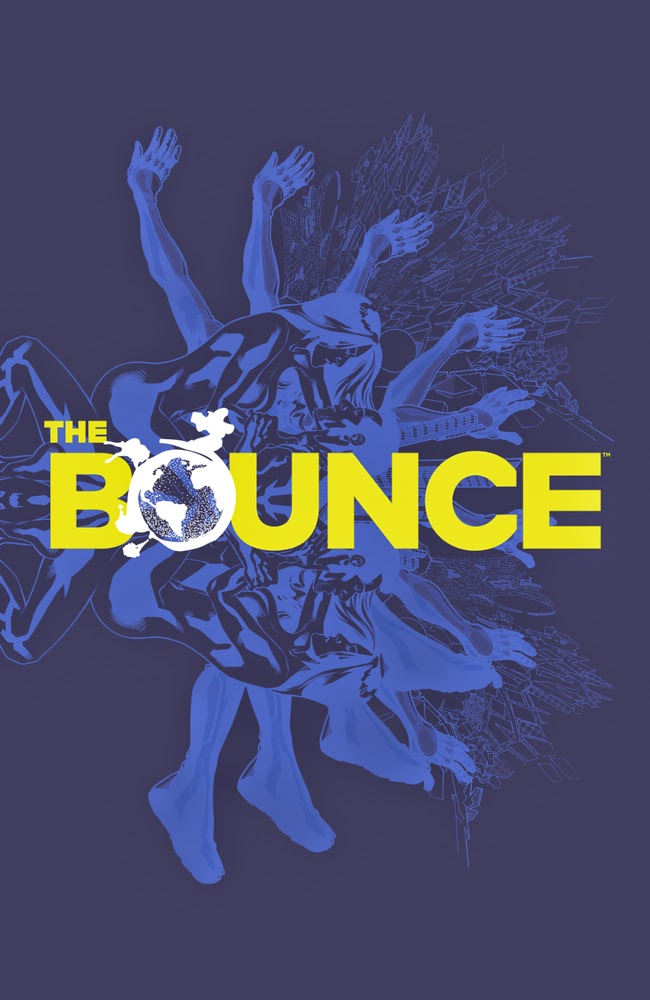