Doctor Who - The Moonbase 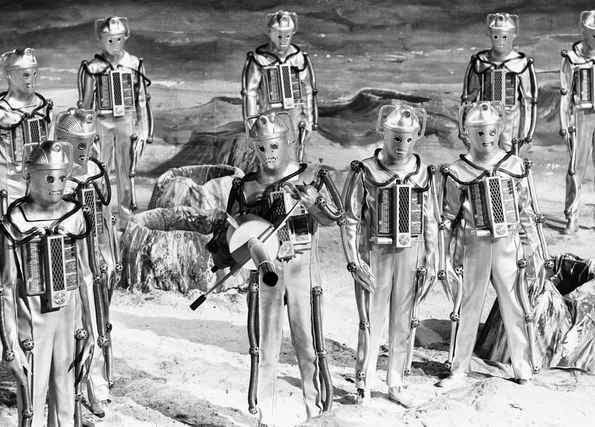 With the Cybermen returning this week The Gallifrayan Gazette decided to take a look back at some of the classic stories featuring the Cybermen. Today The Moonbase.

DoctorWho:
The Moonbase
By Kit Peddler

“Funny. Funny. Go to all that trouble to make the men do the work. Why? Do it themselves, easy. They're using the men as tools. Why? Don't know. Yes, I do though. There must be something in here they don't like. Pressure? Electricity? Radiation? Maybe. Gravity! Now there's a thought. Gravity. Oh, yes. Gravity.”

After the events of The Underwater Menace The Doctor made the attempt to get Ben, Polly and Jamie to Mars.  Where they ended up was not Mars but in fact the moon.  The travelers have fun experiencing the low gravity of the moon until Jamie gets hurt.  Luckily there is a base on the moon that is there to help control the weather on Earth.  But there is a problem in the base.  A mysterious plague has swept over the base only infecting a certain few.  The Doctor has no idea what is causing the crew of the moonbase to get infected but once The Cybermen have been seen sneaking around it becomes all the more obvious what is going on.

The Moonbase is the second appearance of the Cybermen. This time they have been redesigned to look more silvery and they do not have the big control thing that they were carrying around with them.  This new design would be the way they would look for most of the Patrick Troughton era until The Invasion where they get another makeover.  The story was going to be titled The Return of the Cybermen but that was dumped in favor of The Moonbase to make their return a surprise.  It works pretty well as in part one we only see his hands but then for the cliffhanger we see the Cyberman appear as a sick Jamie believes him to be the Phantom Piper come to take him to heaven.  That must have been a pretty good surprised back in 1966 as there was not any internet to spoil the surprise.  No way could they have gotten away with that today.

With the return of the Cybermen in The Moonbase it solidifies their place as a recurring character one that would be only second to the Daleks in popularity.  It was the intent of the production crew back then to find a replacement for the Daleks as they believed that they would not be able to use them for much longer with Terry Nation exploring other avenues for them like a US TV series.  The Cybermen would be a mainstay in the Troughton era and that all started with his fourth story as The Doctor. The overall story is pretty basic but pretty fun to watch.  It is your typical Doctor Who base under siege story which is what most of the stories during the Troughton era were and the type of stories that I enjoy including this one.  This story had a mystery to it as we did not know what was causing the plague until The Doctor figured it out that it was the sugar for the coffee. Not everyone takes sugar that is why not everyone was infected.  It was also a decent ending as the use of the Gravitron, sounds like something out of Gerry Anderson, was used to defeat the Cybermen. Well in essence it more or less shot them and their ships off the moon and towards the sun.  It was not the most exciting conclusion but at least it wasn’t a zap it with the sonic screwdriver type of ending that was pretty much the case in the Matt Smith era.

One of the downfalls of The Moonbase is that there were too many characters. Jamie spent most of the story on a medical bed recovering and Ben was mainly lurking in the background with nothing to do.  There were some pretty good scenes with The Doctor and Polly and it is a shame that most of Anneke Wills stories are missing as it appeared that she had good chemistry with Patrick Troughton and that Polly might have been a pretty good companion.  Another thing is that episodes one and three are missing and have been recreated with animation.  This isn’t bad at all but it does take away from the scariness of the story.  The animation was done really well and it is something to see this story completed this way.

The Cybermen are pretty good in The Moonbase as they used a virus to infect the memebers of the moonbase something they would do again in Revenge of the Cybermen.  They also used mind control to control the humans to take over the gravitron and use it successfully to destroy the Earth shuttle that was coming to help out the base.  What was also pretty neat was that they shot electricity out of their arms to knock people out or kill them.  The Cybermen just seemed more menacing in The Moonbase than in stories they are featured in now.  How scary was it seeing the lone Cyberman lurking around in the shadows picking people off one by one.  Plus how can you forget that one scene where the Cyberman is hiding in the sickbay and The Doctor asks if they searched in there and we find out the Cyberman is hiding under the covers of one of the beds.  Love that scene and it is a classic cliffhanger.

While The Moonbase will not win any of the best Cybermen stories ever awards it is a pretty decent story with some cool things going on it.  With Patrick Troughton, still getting into his own as The Doctor, you start to get a glimpse of how good of a Doctor he will be you can start to see the mannerisms of his Doctor starting to be more prevalent as he is getting more comfortable with the part.  The Moonbase is a fun story to watch as you get a feel for the early developmental stages of the 2nd Doctor and The Cybermen.
Grade B –

Email ThisBlogThis!Share to TwitterShare to FacebookShare to Pinterest
Labels: 2nd Doctor, doctor who, Patrick Troughton, The Cybermen, The Moonbase