Details For Doctor Who Casualties of War Starring John Hurt 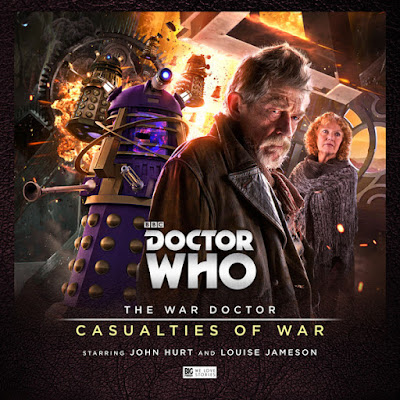 Out this month is the fourth box set in the War Doctor Series starring the late John Hurt. This release sees the return of an old companion Leela played once again by Louise Jameson.  Should be interesting to see how these will interact.  As usual you can order this release from the Big Finish website.
https://www.bigfinish.com/releases/v/the-war-doctor-volume-04-casualties-of-war-1383?range=113

The War Doctor and Cardinal Ollistra are stranded far from their Time Lord forces, with Daleks closing in, destroying all that stands between them. They must call on the help of new friends and old to fight their way back to the front lines. From the outer reaches of the galaxy, to the heart of Gallifrey itself, the Doctor finds casualties in every place the Time War has touched. Among them, a fighter, a travelling companion of the distant past, who remembers him quite differently. A warrior woman named Leela…

Trapped and desperate, light years from their armies at the heart of the Time War, the War Doctor and Cardinal Ollistra discover that wherever they go, destruction follows. A war reporter named Schandel may provide the key to their escape, but it is often said that the first casualty of war is the truth. When the choice between grim reality and a hero’s story means life or death, will the Doctor allow Schandel to print the legend?

4.2 The Lady of Obsidian by Andrew Smith

As a Dalek Strike Fleet heads to destroy another defenceless world, the Doctor seeks help from a shadowy guerrilla force. The Time War leaves many casualties in its wake, and inside the Obsidian Nebula the monstrous Unlived are held at bay only by the ‘Lady’ and her dwindling band of fighters. The War Doctor soon finds himself at the Lady’s mercy, and two old friends face new revelations…

4.3 The Enigma Dimension by Nicholas Briggs

The Dalek Time Strategist has a new plan to ensure final victory in the Time War. As its forces gather for a huge assault on the enemy, ahead of the fleet something hovers above the planet of the Time Lords. And on Gallifrey itself, shadows move among the Cloisters. The Time Lords face a threat alien to their entire universe. To save their world, the War Doctor and his allies must enter the Enigma Dimension...