Doctor Who - The Sontaran Ordeal Review 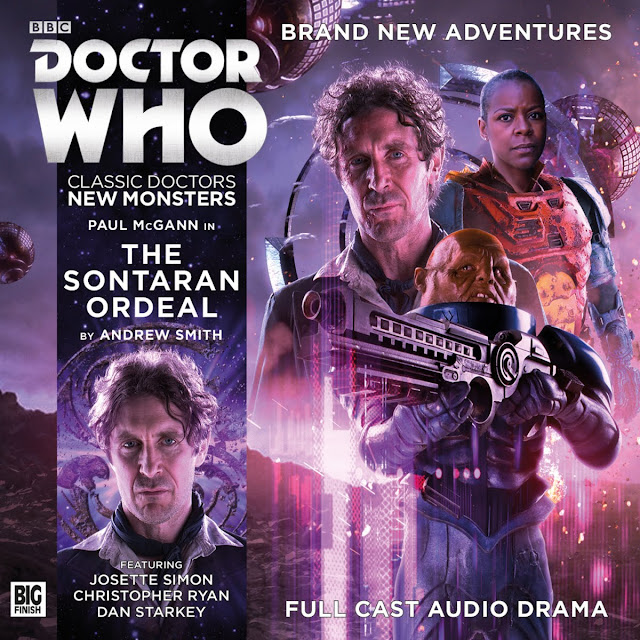 With that said this was a really good story and the surprising part was that it was during the Time War.  The Doctor arrives on the planet Drakkis and tries to tell the Time Lords to leave this peaceful planet alone but to no avail as the battle above changes the history of Drakkis and changing a peaceful planet to one of war.  Then The Doctor meets up with Sarana who tells him all about the conflicts on this planet until they hear the sound of a teleport and what they see is a disgraced Sontaran Jask who they actually try to help him clear his name.  What they need to do is get back on the Sontaran warship and help Sarana bring evidence up against General Stenk.

I liked this story.  To get a glimpse of the Time War and some of the effects of other planets and races is something you don’t really think about.  What most people probably want to see is the Daleks battling the Time Lords but they don’t want to see what the ramifications are for the rest of the universe.  Here we have just that story as the 8th Doctor is not fighting in the war but gets caught up in it anyway and tries to help out where he can even if he feels the brunt of the blame because he is a Time Lord.  He learns this at the end when Sarana, played by Josette Simon from Blakes 7, tells him off for what his people the Time Lords did to her planet.  That was a pretty good scene and it brings it home to The Doctor that even though you are not fighting in the war you are guilty all the same.

I really liked the way the Sontarans were portrayed in this story.  They were not comical like they have been in the Moffat era and they actually are more threatening and you can really take them seriously as villain.  Even though they are in the New Series form I felt that this story treated them well and I really wished this was a story that was on TV as it would have made the Sontarans more credible.  Maybe Chris Chibnal will fix this as I’m really tired of comical Sontarans.  The Sontaran part of the story was pretty different from your usual Sonataran story as you were hoping that Jask would be able to clear his name and stop the glory at no costs General Stenk.  This was pretty well done and it was good to hear Dan Starkey playing it straight and not for laughs.

In all The Sontaran Ordeal was a really good story and Paul McGann is on form as always.  It is one of the best stories of this box set along with Fallen Angels and definitely worth the price of the box set.
Grade A