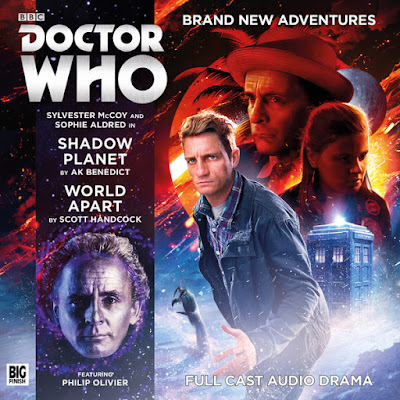 Out this month is a 7th Doctor adventure that takes place during the Ace and Hex companion era. You can order this release from the Big Finish website.
https://www.bigfinish.com/releases/v/shadow-planet-world-apart-1256

Troubled? Anxious? Tormented by self-doubt? Come to Unity, the psychic planet! From our therapy centre beside Unity’s idyllic shores, the Unity Corporation can help you overcome all your problems. How? By using a patented combination of technology and Jungian psychology, we can bring you face to face with your shadow self. The hidden you. The dark you. The you that no-one knows…

Rest assured: the process is perfectly safe. Nothing can possibly go wrong. And that’s guaranteed!

If you’re reading this, it’s too late.

There’s no way off this planet.

You will never escape Nirvana.