Doctor Who - Who's Changing - An Adventure In Time With Fans Review 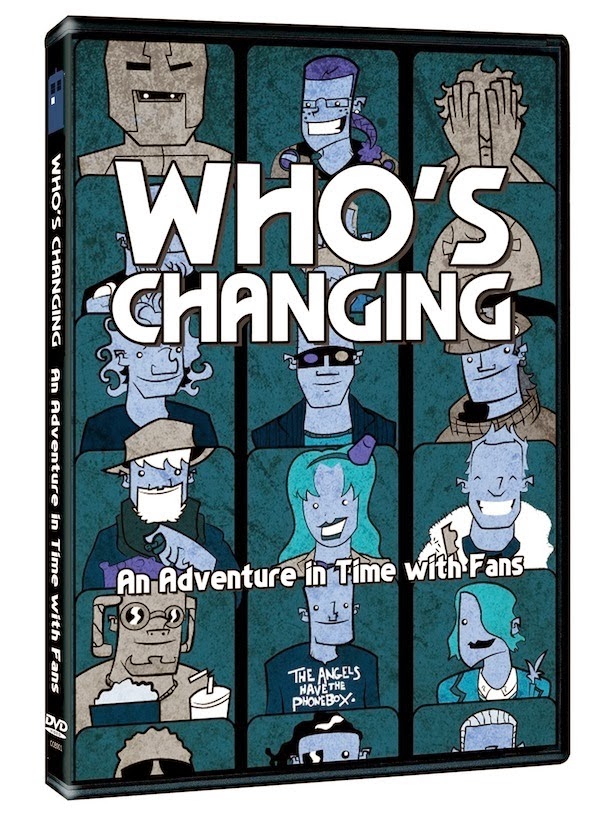 Who's Changing :
An Adventure In Time With Fans

I don’t usually watch documentaries.  The ones I usually enjoy watching are the ones about my favorite Boston sports teams winning yet again another championship and the trials and tribulations it took to win that championship.  Right now I’m watching the ones about the 2013 Boston Red Sox winning the World Series which for me was a delight and surprise as they were not predicted to even be a contender but back on topic with documentaries.  I generally do not watch them that much and when a new Doctor Who DVD comes out I generally watch the episode and do not watch the extras or VAM as you call them in the UK.  So when I saw the trailer for Who’s Changing and posted it on the site I was a bit curious.  A documentary about Doctor Who fans that is funded by Doctor Who fans through an internet fundraising site and most importantly it was made by fans. I was pretty intrigued that I had to have this DVD and watch it.


Who's Changing - An Adventure In Time With Fans is produced by Capital City Entertainment who is run by a couple of guys that are very familiar in the world of Doctor Who fandom.  The first is Elisar Cabrera who runs the popular Doctor Who podcast Talking Who (@TalkingWho ) and the second, everyone knows this guy, is the creator of one of the most popular Doctor Who websites Blogtor Who (@BlogtorWho) Cameron K. McEwan.   Cameron also has a Doctor Who book out also The Who's Who of Doctor Who and is working on another one due later this year.  The fact that these two recognizable names in fandom made this documentary is the main reason I wanted to get and watch this documentary because it would really give us a sense of the fans point of view and not be a water downed account or make fun of the fans as a corporate one might.  I knew it would be made with utmost care and I wasn’t wrong in my assessment.

I really enjoyed watching Who's Changing - An Adventure In Time With Fans.  It was extremely interesting listening to all the interviews with the various fans and celebrities talking about the first Doctor Who convention that took place in a church in Battersea in the late 70’s to the formation of The Doctor Who Appreciation Society, The Wilderness Years, and Cosplaying.  I really found the part about the beginning of Doctor Who fandom to be the most interesting and hearing the accounts of those who were there like Gary Russell and Louise Jameson talking about how Doctor Who fandom was 95 percent male and then hearing them talk about how it is like today with it being an even split of 50/50 male and female.  Doctor Who fandom has really taken off and hearing Sophie Aldred and Tony Lee talking about the early days compared today really got me nostalgic as I remember those days fondly.  Just to see where Fandom has come to and seeing it in this documentary is really amazing.  It is especially great to see how fandom has evolved now and hearing all the different viewpoints from the old fans and new fans is truly a highlight of the documentary.

I was around during The Wilderness Years when the fans kept the spirit of the show alive. It is true and this documentary does a good job of explaining what went on during that time period with the Virgin Books and Big Finish.  It still amazes me that a lot of those writers are now the same ones that have a hand in making the show today and more importantly they are fans themselves.  It is probably why the show is as popular as it is as the fans are taking care in making a product for everyone to enjoy whether you like the new direction or not so much.  I really loved this history lesson as there was quite a bit that I had forgotten like Russell T. Davies writing a New Adventure novel.

As a convention goer I have noticed the big Cosplay movement.  Who’s Changing does a wonderful job explaining this especially for those who do not get it.  Well mainly for those who do not go to conventions anymore and just sit at home drinking beer and Doctor Who DVD’s.  It is really interesting to see how many people dress up as their favorite Doctor Who characters at conventions.  It seems like the biggest participants are female and they have no qualms about dressing up as The Doctor at all and even putting their own twist onto the character.  It is good to see this as it brings new enthusiasm to conventions and keeps the fans interest in the show as they discover new characters they can dress up as. Some really good Cosplay on display in this DVD and they are all having a great time it seems.

I really liked this DVD.  It was good to see Neve, Campbell, Catrin Stewart, and Dan Starkey talk about being fans of the show and of course Simon Fisher – Becker talking about his first memory of Doctor Who as being the Hartnell to Troughton regeneration.  It was also good to see extended interviews with the Doctor Who actors in the extras and that added a lovely highlight to an already great DVD.

You can buy the DVD  Who's Changing - An Adventure In Time With Fans at these links
http://whoschanging.moonfruit.com/#

Email ThisBlogThis!Share to TwitterShare to FacebookShare to Pinterest
Labels: doctor who, Documentary, Who's Changing - An Adventure In Time With Fans