A Novel by David Mitchell 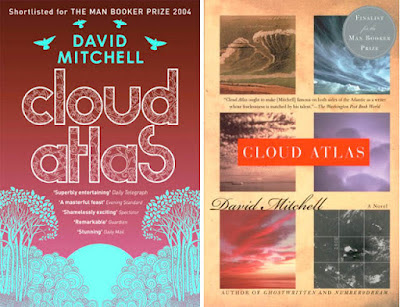 In my search for good contemporary Sci-Fi novels, I came across David Mitchell’s Cloud Atlas and right away I had remembered that this book is being turned into a movie for release later this year.  With my interest peaked, I tackled this book and what I found was a highly original and refreshing read.

The novel is divided into 6 different stories with only half of each tale being told to start with and each one being completed in the second half of the book.  This made it difficult for me to remember what had been going on in the earlier stories.  I guess this complaint is common in other reviews as well so it is not just me.

What kept me going was trying to figure out how each of these stories were connected and how a novel can span hundreds and eventually thousands of years and yet have stories that are related in some way.  The author does this in some fairly ingenious ways.  Themes of reincarnations and history repeating itself are obvious.  The connections among these characters is confusing and in glimpsing a short trailer of the upcoming movie it was made even more confusing as some actors would be playing multiple parts throughout the entire time of the book.  I tried to ignore this aspect and just went with the novel.  Nothing is worse then seeing Tom Hanks’s face appear in my imagination as I continued to read the novel.

What was also excellent and at times complex, was the reading of each different story.  Told from a first person perspective, the stories were all formatted in their dialog of the time.  The stories from the past had that old fashion style and the stories of the future went as far as introducing us to different words entirely.  Mitchell does a great job coming up with this wording and while it takes the reader time to get used to it, it certainly immerses them into the story.

The futuristic stories in this novel are as interesting as the contemporary and historic ones.  I suppose if I had to pick one I did not like as much it would be the Journal of Adam Ewing especially since it seemed to have little to do with anything.  Actually, I remember reading the Journal and seeing the story just end and I thought there might be a defect in the novel.  I did discover that it was supposed to be like this.  The final pages of the novel revisit this story and it was hard to remember what had happened earlier on.  I don’t read very fast (only a few pages a night) so it had been nearly 5 weeks since I started the novel.  Reading it quicker might give people more understanding of the novel as I found myself turning back a few times just to remind me what had happened.

Complex formatting aside, I loved the book and as days went on, my interest in the upcoming movie grew.  The movie was already on my radar but with only a few pages left I finally saw the longer Cloud Atlas trailer and was blown away by all the imagery I recognized.  I can’t imagine how the movie will be able to even begin to capture the novel and all its stories and characters.  The Ghastly Ordeal of Timothy Cavendish was a very fun sarcastic story and can’t imagine the movie doing it justice but we shall see.

The book had plenty of statements about class struggle and the relationships between different types of people.  Our lead characters all have hurdles and downfalls but in the end they triumph and learn more about humanity.
Posted by SHADOKP at 1:41 PM